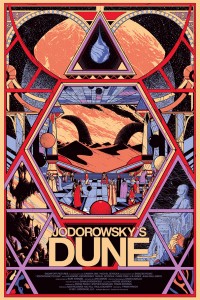 RYAN: I remember seeing the sci fi movie Dune when I was a kid but I don’t remember much about it, aside from a desert.  But there was a different version of the film in development before that one – way more ambitious, to be helmed by Alejandro Jodorowski.

CAROLINE: And what happened to it is the premise of this new documentary.

RYAN: Precisely. This is such a good documentary!  It’s so interesting and insightful about the project but also a glimpse into the film industry at another time.  This movie is for real movie lovers and sci fi geeks alike.

CAROLINE: I’d be interested to see the story about it even though I’m not a huge fan of science fiction.

RYAN: You really don’t need to be. It’s such an interesting story about one man’s passion and how he rallied so much support.  It’s the ultimate tale of what could have been but wasn’t meant to be.  And it’s a little heartbreaking and makes me want someone to make it today – or an animated version while he’s still alive to see it!

CAROLINE: That’s cool that you totally connected to it that way.

RYAN: The score is super cheesy and weird in this film which I found a bit annoying but eventually just became immune to it.  It’s funny because Jodorowsky says he wanted to make a movie that would make people feel like they were having an LSD hallucination.

CAROLINE: Well that explains why it didn’t get made, right? Who’s gonna back that?  It’s absurd.

RYAN: But it really was planned out in every way – every detail and it was so much more than that.  Many credit it as “the greatest movie never made.”

CAROLINE: What does that even mean?

RYAN: Because it was so entirely thought out with storyboards and sketches and plans, it has lived as a sort of sci fi bible, making the rounds in Hollywood and has influenced many big movies – this documentary goes there and illustrates how important Jodorowsky’s vision was and is in Hollywood.

CAROLINE: That part is fascinating.  Ideas do come at a premium in Hollywood.

RYAN: I loved how close this movie came to being made – the producer rented a huge castle in France for Jodorowsky to live in whilst writing the script.  He basically ruined his son’s life for two years, prepping him to play the role of the boy in the film.  He passion was just unlimited.

RYAN: This doc is really for anyone who really likes movies and would be interested in a cool behind the scenes story – or for real sci fi junkies.  I loved it.  It’s very heartbreaking but also uplifting.  I keep thinking it’s called Jodorowsky’s Dream – because that’s what Dune was to him – a dream.

Thanks For Viewing The Jodorowsky’s Dune Review