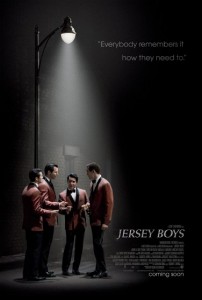 RYAN: The Broadway musical Jersey Boys is one of my favorite shows and I couldn’t be more excited about this adaptation coming to the big screen and I really loved it.  I love musicals.  It’s a great one but interestingly, it’s so different from the stage show.  My expectations were high and although it’s largely the same script and music, it’s such a different vibe than the Broadway show.  It’s more like a biopic… with music.  I loved it.

CHUCK: This may go down as the quietest movie musical but I really loved it too.  I agree with you that it feels more biopic than musical.

RYAN: It’s more like Walk the Line than Mamma Mia!

RYAN: Whereas the stage show is a bright, fun, fast musical; this movie is desaturated, edgier and more dramatic.

CHUCK: Right.  And while I grew up listening to The Four Seasons and Frankie Valli, I never saw the show and didn’t know the story.  It’s important that they focused more on the plot punctuated with music instead of these big musical numbers that might have taken away from the reality of what these guys went through.

RYAN: True and reality is the operative word because the film adaptation does feel much more real than the stage production and that’s thanks to the vision, courtesy director Clint Eastwood.

RYAN: Although he is quite well versed in the musical, having scored many of his movies and appeared in the movie musicals Paint Your Wagon and Honkytonk Man.  He really toned it down for Jersey Boys and while it’s different, I still love it.  It makes the period more real.

CHUCK: The movie does have that overly desaturated look; a lot like those old Kodachrome photos we have of our grandparents in the 50s and 60s.

RYAN: He is such a powerhouse director who rely highlights poignant moments between actors and intensity on the drama.  This film features those elements.

CHUCK: It follows their lives from their teenage years all through the drama of their careers and personal lives, specifically Frankie Valli’s.

RYAN: Yes – the absolute best thing this movie has going for it is the casting.  Three of the four main guys are, brilliantly, performers who’ve done the show on Broadway or on tour.  It was so right to cast them instead of going with big box office stars..  They know these characters inside and out – especially John Lloyd Young as Frankie Valli who won the Best Actor Tony Award in 2006 for originating the role on Broadway.  He’s so brilliant.  All the guys are so so good.  I love how they alternate narrating the film, as they do in the show.

CHUCK: That alternating point of view was brilliant.  Their perspectives were amazing.  Bigger names in these roles would have felt distracting.  Unlick the upcoming Into the Woods movie adaptation, which has an all star cast, the name on Jersey Boys is Clint Eastwood.  That will bring people to the movie that haven’t seen the stage show.

RYAN: And the supporting cast is great too.  Christopher Walken and Renee Marino, as Frankie Valli’s wife, gives an Oscar worthy performance as Supporting Actress.  This role is her film debut!  Outstanding.

CHUCK: Walken is so great.  There really wasn’t a single wear link in this whole movie.

RYAN: I love the musical moments, especially when they become the Four Seasons.  It really picks up then.

RYAN: And then Michael Lomenda also has a truly crowd-pleasing moment as Nick Massi.  Erich Bergen and Vincent Piazza are also just genius in these roles.  Vincent Piazza hadn’t done a stage production of the show, but just nails the role on screen.

CHUCK: They all are fantastic.  Erich looks so much like Tate Donovan.

CHUCK: It’s just filled with talent and really fun.  It’s a very cool behind-the-scenes celebrity story and it shows that it’s not all the glamour you’d imagine.

RYAN: Frankie Valli produced and it’s cool to have that authenticity attached.  Clint did an outstanding job – it’s cool and fun and has the best end credits scene of any movie.  Whether you’ve seen the show or not, you’ll enjoy the movie.

Thanks For Viewing The Jersey Boys Review