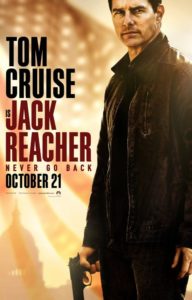 RYAN: It’s not as good as the first, but it’s still a Tom Cruise action movie. Four years after the first Jack Reacher, comes the sequel and while I don’t wanna call it a sequel slump, it’s not as fresh as the first. But there are some real areas that are weaker than others in this one.

RYAN: Some of the lines are cheesy and it’s a bit too long. The last thing you need in an action movie is for it to lag.

CAROLINE: Honey – in any movie! If you think it’s too long it can be a killer. So did that ruin the movie?

RYAN: Not at all. The action is still very winning. You just wanna see more of it. But what is there – the chasing, fighting, running – yes! There’s is the iconic Tom Cruise running moment.

CAROLINE: How could they not?!

RYAN: And some of it is pretty jaw dropping, which is what I’ve really come to look for in new action. And the chemistry between Tom and Cobie Smulders (The Avengers, Agents of S.H.I.E.L.D) is unique. Their scenes bring some good yearning and almost an old-married-couple dynamic that really works. It brings some fun drama and comedy into the fray.

RYAN: We’ve said it before, but seriously, how does he not age? It’s quite disconcerting. He just looks the same as he ever has. What’s in his water?

RYAN:The story keeps you interested enough, but does stall at times, mostly when involving the younger cast member Danika Yarosh, who is miscast in the role. It’s her first film role and she’s not very good. But the plot about government loopholes, a corrupt US army, to get Reacher back in the mix is cool. And the action that is there is as edge of your seat as ever.

CAROLINE: Did it remind you ever of Mission Impossible?

RYAN: You can’t really avoid the comparison but thats a good thing. Those movies are even better. There are two climaxes and both are good but then the final scene is so long, I almost couldn’t believe it. It’s obviously dragging and how they didn’t cut it down is almost shocking. But the movie, overall is still good.

Thanks For Viewing The Jack Reacher: Never Go Back Review