Into the Woods Review 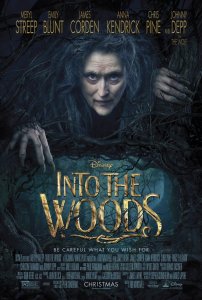 RYAN: I’m excited to be reviewing this movie with Chuck because we watched the recorded version of the original Broadway cast together back in…

CHUCK: I remember sitting on your couch, watching it on PBS back in 1989.  We were in high school.

RYAN: I remember.  It’s always been my favorite musical until 2003 when Wicked opened on Broadway, moving Into the Woods into the second spot among my faves.  We both have this show memorized by heart. We’ve seen it a bunch of times produced locally.  I saw the Broadway revival starring Vanessa Williams as the witch.  And it’s sort of full circle for us to see and review this film adaptation together.  I’ve been praying this would be made into to a movie for decades!  Here it is and I absolutely loved it.

CHUCK: It’s Disney and Sondheim together so for me, this is as good as it gets.  It’s one of the best days of my life!  I was nervous going in because we know the original show so well. Just three months ago I watched the original Broadway version with Bernadette Peters again with my nieces and nephews.  It’s fresh in my mind and the fact it’s now on the big screen is a dream come true.

RYAN: Yes.  It was something I’d been hoping would happen in my lifetime and now I’d like to see adaptations of Wicked and Ragtime and then I can stop praying.  Adaptation is key here because when you’re adapting anything – a book, a stage show – there has to be changes.  It’s a little jarring – I’ve now seen this movie four times… but if you’re as familiar with the show as we are, the changes sort of smack you in the face.  I don’t like all the changes but I can live with them.  As a fan of the show, I especially miss the songs that were cut.

CHUCK: Agreed.  And we can’t really talk about them because we have to let people discover them for themselves.  No spoilers.  I also miss the eliminated songs and I had to check myself many times to stop comparing it to what we know.  The arrangements and the play had to be tweaked and the storyline manipulated to make it work for the screen.

RYAN: Sondheim is known for his smart, quick, complicated lyrics and in this show there are often characters in different places, in different storylines, singing together at the same time.  On the stage, you can see that one way but it was filmed in a way that you are not given a choice of where to look because of editing.  The director made the choices of who and what you’re looking at which streamlines the story appropriately for film.  Rob Marshall directed it and is a cinematic genius.  It’s much more linear on screen.

CHUCK: Absolutely.  He did a fantastic job.  He has a musical background and he really put so much care into this.  He took a piece of treasured American art and he had to be respectful to it and it was beautifully shot.

RYAN: You can tell it’s a Rob Marshall film – if you look at Memoirs of a Geisha, Chicago, Nine… he often highlights a pop of color in his films and here reds and blues really pop; Little Red Riding Hood, Meryl Streep and her blue-ish witch.

CHUCK: Going into the woods is a thematic element.  It’s not a literal thing and having those pops of color, out of the ordinary, represent pieces of life that pop.

RYAN: The scope is incredible.  When the camera pans and zooms out and you see the full woods, it’s chill-inducing in a way you can’t see on stage.  That made seeing this movie thrilling.

CHUCK: You get the idea of getting lost in the woods and the inter-connectedness of it all.  The special effects were wonderful without being too showy.

RYAN: All appropriate.  We’re dealing with magic and fairy tales and it’s all brought to life masterfully.  Meryl Streep can and does get nominated for anything she does.  She has received a Golden Globe and Critics’ Choice Movie Award nomination for this performance and deservedly so.  Her singing is better and stronger than you’ve ever heard it.

CHUCK: Totally better than how she sang in Mamma Mia!  I was excited when I heard she was cast and she’s better.  This is Sondheim and she sang it.

RYAN: I loved Emily Blunt as the Baker’s Wife.  She nailed it.  Joanna Gleeson won the Tony Award for that role on Broadway.

CHUCK: She was iconic in that part.  But Emily’s endearing and when it matters she does nail it.

RYAN: I know we’ll disagree here but I really liked Johnny Depp as the wolf.  I liked the arrangement of his song.

CHUCK: I just hate Johnny Depp so we can move on from that.

CHUCK: I hope it’s another role where people stop and realize how talented she is.  She’s brilliant and she found the comedy where it should have been. Chris Pine…

RYAN: He’s award worthy in this.  He’s a show-stopper!

CHUCK: Who knew?  And the other prince, Billy Magnussen, is great too.  So cute.

CHUCK: That’s the first time I’ve heard people applaud in the middle of a movie.

RYAN: I wanted to applaud the whole time. The kids – Daniel Huddleston as Jack… he was in Les Mis, the movie and he’s amazing.  I love Jack’s song; one of my favorite in the show and he owned it.

CHUCK: I hope he has a strong future in movies, on Broadway, in the West End.  He has a great presence.

RYAN: And Lilla Crawford who was the most recent revival-Annie on Broadway is Little Red Riding Hood and she’s perfect.

CHUCK: She’s a different type than the original.  She’s a bit less funny.  In general the movie lost a bit of the comedy than the stage version.

RYAN: And some of the edge and bite.

RYAN: But the stage show is really more PG-13 with the innuendo and such.  The darkness is also watered down and that’s disappointing because where the show is dark is so deep and poignant.  I wish the film had retained that depth and poignancy.  The main theme is still there but it really doesn’t hit you as hard as on stage.  And some of the moral brilliance, and metaphor is cut out.  I would have rather the movie been PG-13 and an hour longer and kept it all in there. But maybe I’m a bit of a loyalist to the material.  All changes were with the writers’ blessing – James Lapine and Stephen Sondheim wrote the original and and did this adaptation.

CHUCK: There was some controversy prior to release that fans worried the show would be watered down too much but ultimately, they decided to make a PG movie.  It’s PG.  The stage show is PG-13.  It’s Disney doing a story about fairy tales.  It’s family entertainment.

RYAN: But we’ve seen Disney movies that show explicitly what was cut out of this film so I’m confused.

CHUCK: But that’s part of the woods – they’re an allegory for life.  You get the light and dark, the good and bad.

RYAN: Colleen Atwood did the costumes and they’re new yet familiar.  Beautiful.

CHUCK: Give her the Oscar now.

RYAN: The whole design is great – they shot partly outside and partly on sets that created as much woods as possible.  So it’s not all green screen.

CHUCK: It’s seamless.  Visually it’s stunning.  Even the score was lush.  There have been rumors this would be made into a movie over the last 15 years and I’m just so glad it’s finally here and done so well with such reverence and talent.

RYAN: I’m just so thrilled it’s here.  Waiting for this to come to the big screen is finally over and now I can’t wait to own the Blu-Ray and see it anytime.  I’ll definitely be seeing it in theaters again over the holidays.  Love.

Thanks For Viewing The Into the Woods Review