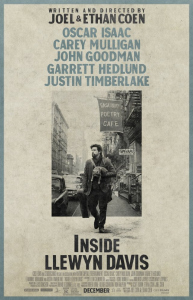 RYAN: This is the latest from the Coen Brothers who are relatively known for making edgy, shocking, profound and interesting movies in comparison to everything else out there.  As for this one, however, it’s mostly mundane.

CAROLINE: They’re also known for a lot of violence in their movies which this one has virtually none of, thankfully. It’s about a folk singer in the 60’s.  I thought it would be much more about the music industry; however, it’s really just about this one depressed guy.

RYAN: Exactly.  And that’s part of the problem I have with this movie.  When you have no choice but to identify with a film’s protagonist, it’s a lousy way to spend a couple hours – depressed and feeling very little about anything around you.  And his life is peppered with more interesting, emotive people, like a very shrill Carey Mulligan.

CAROLINE: She is full of hatred for Llewyn Davis though I wasn’t quite certain why.  He’s definitely a loser, albiet a challenged one.  I felt sympathy for him, but was also very frustrated by him.

RYAN: I also felt a bit for him and that’s primarioy because Oscar Isaac is just so cute and talented, but ultimaely I didn’tcare because the movie really doesn’t explain or give a concrete reason as to hiis totally apathetic attitude toward everything.  Is he bitter?  Why is he so broken as a person?

CAROLINE: Oscar totally reminds me of a combo of the guy from TV’s Numbers and Jake Johnson from New Girl.  He was great in this movie even though his character was very frustrating.  Also look for supporting roles form Justin Timberlake and the male cast of HBO’s Girls.

RYAN: Don’t forget the John Goodman who was hilarious and creepy.

CAROLINE: Yes – he is essential to any Coen Bros movie.

RYAN: Back to JT for a moment – I was thankful to hear him sing in this one but sadly, he’s about as good in this as he was when ruining Runner Runner recently.  He cannot act.  I rest my case.

CAROLINE: His part in the movie is really a cameo, but he’s almost too famous at this point to try to be an actor because I can’t stop thinking, “Oh look – there’s JT!”

RYAN: It was nice seeing Oscar and Carey together again on screen, after their teaming up in 2011’s Drive.  That wasn’t a Coen Bros film though.  And in comparison to their other movies, Inside Llewyn Davis is so much less shocking and interesting.  I was pretty bored during this becuase it’s so slow and never goes anywhere in the story.

CAROLINE: I liked it more than you though. I agree it is slow and not what I expected.  I was not bored but I could see why this isn’t a movie for everyone.  I always enjoy a movie with songs in it.

RYAN: I relaly loved the music in it and it’s almost a musical or at least a movie with music in the story – plus the design and desaturaiton is very well done.

CAROLINE: I couldn’t beilieve how many scnees they did that recreated the period with the kitchen and the cars and the extras – everything in the sets was so authentic and impressive, caputiring the time persiod really well.  I liked this movie but didn’t love it. Fans of the Coen Bros will want to see it, and should; but, in this award-season this is not a must see in the theater.

RYAN: I’m disasppointed in this film because I have a higher lever of expectation when it come to this directing duo.  There are some nice elements to it but it’s not a must see.

Thanks For Viewing The Inside Llewyn Davis Review