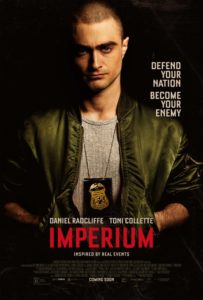 RYAN: This film is “inspired by true events” and that’s where I have to begin this review because I was absolutely beside myself watching this film.

CAROLINE: Yeah I have to imagine, considering the subject matter, it’s one of those movies that’s sad it’s based on, or inspired by reality. Daniel Radcliffe basically infiltrates a white supremacist group, posing as a Nazi skinhead, right?

RYAN: Yes. He’s an undercover FBI agent. And Toni Collette plays his FBI advisor and their scene work together in this is the best part of it. I love them both and they’re both good, but I don’t think I would have liked this movie in the least without them. It’s not the best script. Nothing is very impressive about it – from suspense to editing – but the casting certainly elevates it.

CAROLINE: You do love The Harry Potter.

RYAN: He does a great American accent in this. Some of this movie made me sick to my stomach because of the language – the words we don’t use that disparage groups of people. It’s uncomfortable hearing them but there are people who use them to hurt others. It’s disturbing. Basically the white supremacists, the KKK, the nazis, according to this movie, want to start a race war. They want to Holocaust here. And the sickest part is seeing how people are raising their children with these hateful ideas.

CAROLINE:How’s Toni in this? I like her short blonde hair.

RYAN: She’s good. It’s not a huge role but she has some grit. She chews gum in every scene. It’s so random.

CAROLINE: So how is the movie, overall?

RYAN: The script is pretty basic. There were several times where the characters seemed flattened out and predictable by the script.

RYAN: I think because I like the stars, and because hearing things like “a revolution to end races,” and “throwing a youth event for Hitler’s birthday,” are so disturbing, it distracts from the problems of the film – but it’s not strong on every level, so it’s one to catch at home someday.

Thanks For Viewing The Imperium Review