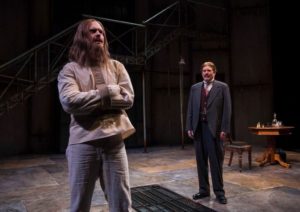 On a roll this season with boundary-pushing productions, The Milwaukee Rep soars with Holmes and Watson, a play that exemplifies the mystery genre. The script is by Jeffrey Hatcher, who wrote the screenplay for the Sir Ian McKellen Sherlock movie Mr. Holmes. This stage production tells a different story about the iconic detective that is almost as thrilling as Robert Downey Jr.’s take on the literary figure.  The cast is stacked with superb talent – with stand out moments for the three patients (Grant Goodman, Ryan Imhoff, Rex Young) at the asylum. It’s a very easy show to get swept up into because the pace is so quick. It hits you with several twists and serves a satisfying reveal in one complete act that clocks in just under 90 minutes.

The show also uses state of the art technology to create one of the coolest sets I’ve ever seen, which really augments the storytelling. The inclusion of a beautiful and cleverly placed score makes the play feel almost like a film. Holmes and Watson is exciting, smart, fast, edge of your seat entertainment.

Holmes and Watson plays now through December 17 at the Quadracci Powerhouse. For tickets: MilwaukeeRep.com.

Thanks For Viewing The Holmes and Watson Stage Review