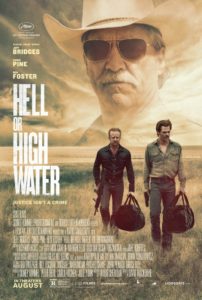 RYAN: This is a modern western movie. There are cops and robbers, cowboys and indians but in present day. It’s a bank heist action film without much action. It’s slow moving, boring… there’s a lot of space between good moments.  I felt impatient watching this. It’s a good case of mismanaging expectations because I went in expecting a much faster movie than this is. But I’d like to welcome my dear friend Maria Calarco to this review with me. You love movies as much as I do and I think having you there was the best part of the film.

MARIA: Aw thanks I’m happy to review this one with you. You actually leaned over and whispered to me during the film that this was too slow. And I said, “Welcome to Texas.” It’s west Texas and it is slow moving there.

RYAN: I was so bored, personally. There are some decent moments though. The first time we perked up, you checked the time just to see and…

MARIA: It was 40 minutes in the first time anything somewhat exciting happened. And then it ramped mildly an hour in.

RYAN: Yeah it stalls again. I was frustrated and was beginning to think of the other things I could have been accomplishing with my time – the book I’m reading, TV I wanna catch up on – grocery shopping…

MARIA: Yeah it was slow.

RYAN:My favorite part of the film was anytime there was a woman on screen and they were such fleeting characters – the waitresses, bank tellers or the cop at the end.

MARIA: Except for the ex-wife who was dead in the water.

MARIA: I thought the end was pretty cool. I wanted to see more of what was happening.

RYAN: Not a bad ending and the cast is good – great performances. We’re both fans of The Jeff Bridges.

MARIA: And the guy from Twilight, he played Jacob’s father.

MARIA: He’s so hot in this and who’s his brother in this?

RYAN: That’s Ben Foster whom I used to have such a girl crush on but not in this movie. He’s not looking so hot in this movie – to be perfectly shallow.

RYAN: And he doesn’t play an attractive person on the inside, either. It’s an interesting look and family and especially the relationship between these two brothers. It’s about the choices you make to find the means to an end and how far you’ll go for your family.

RYAN: They had good rapport and on screen chemistry. There is some humor – it’s very racially driven. It’s not offensive, but.

MARIA: Going back tot he stereotypes of Texas, that all fits to a T. It’s a movie for him on the couch.

RYAN: There were some moments but if I had started this at home, I wouldn’t have finished it.

Thanks For Viewing The Hell or High Water Review