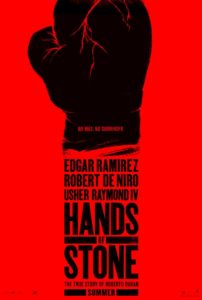 RYAN: This is a biopic of Roberto Duran – a Panamanian boxer from the 70s/80s. I wasn’t interested in seeing this movie and then it turned out much better than expected. It’s very easy to watch and his life is a good story; the boxing sequences are shot differently than I’ve seen in other boxing films and there were more detailed sound effects.

BECKY: It was shot in a more interesting way.They used different speeds but it was very well done – it was orchestrated like a ballet.

RYAN: The fights were perfectly choreographed, I would agree.

ERIK: I enjoy good boxing movies and have seen my fair share of them. I liked some of how they filmed these fights, but in one fight they edited a bit too much. The extreme closeups were a bit much.

BECKY: When you watch boxing matches, it’s not closeup, so I liked that this movie brought us in.

RYAN: As far as the sport goes, what I really like about this movie, is that I learned for the first time how much it really is involved the psychology of the boxer – not just the physicality and throwing the right selection of punches. It’s a mind game too.

BECKY: And hello Usher in this movie. He’s the Zac Efron of this film. He was very likable in this.

ERIK: He was really good as Sugar Ray Leonard. And it’s funny because he’s sometimes smiling in the background and I was wondering if he was acting or really just glad to be there.

RYAN: (laughs) He was great though. The whole cast was good. Robert DeNiro, Ana de Armas, Usher is clearly doing a lot of squats because you see Usher booty in this, and then Edgar Ramirez is so easy on the eyes. We’ve all seen love scenes in movies before but this was the first time where I was actually kind of turned on, watching a love scene – they made it super steamy. I almost couldn’t believe it.

BECKY: I was a little bit turned on it. It’s arousing. They did it well. It’s well lit and lascivious.

ERIK: These were some very, very attractive people having intercourse. It did go on for a while.

BECKY: The women in this movie kind of sucked because they were encouraging their men to have these careers instead of staying safe for their families, but it’s a boxing movie…

RYAN: This movie is quite ambitious in its scope of sotrytelling because it’s not only about Duran’s career, but also about his childhood, his family, what’s happening politically in the nation of Panama at the time, the world of boxing… there’s a lot going on.

ERIK: The movie does bite off more than it can chew. The most effective part was Panama because they were up and down at the same time.

BECKY: That is a good parallel because he was everyone’s pawn.

RYAN: A pawn and a champion.

BECKY: But he seemed smarter than everyone really gave him credit for.

ERIK: And Edgar really made him much more likable as a character than perhaps any other actor could have made him. He’s charming and then you see the dark side but Edgar brings a humanity.

BECKY: I didn’t think I could watch this but he did make it easier to watch it. It’s interesting – we are all three different audiences, a man, woman, gay guy and we all three liked it – for a boxing movie, that’s good.

Thanks For Viewing The Hands of Stone Review