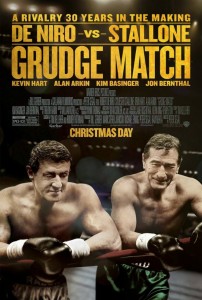 RYAN: This movie is so randomly opening on Christmas day when most other movies are big blockbusters or major award contenders.  This fits into neither category.  It’s actually a very lighthearted boxing movie which is an oxymoron. It’s fine, it’s sweet but I don’t want my boxing movie to be sweet.  I want it to be rousing and inspirational.

KIM: You’re right it is an awkward time to be opening this movie.  I would think January or February would be much more worthy of this movie.  Not that it was bad but it was certainly not Oscar bait.  But speaking of inspirational, it could be viewed a bit that way… two old guys get back into shape, etc…

RYAN: You’re right, from that perspective.  But I don’t like boxing as a sport, but I’ve enjoyed boxing movies like Rocky, which is almost a superhero movie, or Million Dollar Baby, which is hardcore drama.  But the neat thing about this movie is seeing Sylvester Stallone, who was Rocky, and Robert DeNiro, who won the Oscar for playing a boxer in Raging Bull, play boxers again.  That’s kind of special.  It’s just like Rocky for old people the way Last Vegas was The Hangover for old people.

KIM: (laughs) Yeah.  I laughed out a couple times and thought it was sometimes funny.  Kevin Hart added some good humor to it.  It was very lighthearted and would skew more to the older generation.

RYAN: I actually misjudged this movie thinking it would be a total boy-movie but really, the parts I liked best about the movie were the scenes about love, reconnection and family relationships, not the boxing scenes.  Kim Basinger and Alan Arkin are both in it and brought a lot of heart to it.

KIM: They provided a lot of substance.  One of the major themes was family, you’re right.  Those were some of the more cinematic moments.  You knew the fight would happen, but you don’t necessarily know from the trailer there will be as much subplot as there is.

RYAN: For a movie called Grudge Match, the ultimate match is so anticlimactic. Majorly!

KIM: I liked how the match was sponsored in a comical way. But back to Kim Basinger – How hot did she look?! That’s a rhetorical question.

KIM: She walked on screen and looked like she hasn’t aged a day since Batman.

RYAN: She’s clearly had good work done.  And Sly and his new face look better now that seven years ago.  DeNiro is again more gracefully.  The movie’s a little too long, just shy of two hours.

KIM: They could have cut out about fifteen minutes.  But it was cute.

RYAN: It’s better than expected.  It’s light but not edgy or rousing the way a boxing movie really needs to be; plus there are all the current Golden Globes and Critics’ Choice Award nominees out now which are way more worth seeing in the theater, so this one’s a rental.

Thanks For Viewing The Grudge Match Review