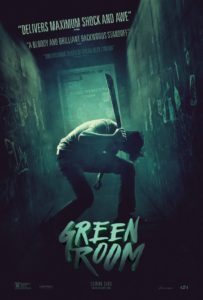 RYAN: This movie freaked me out into next week! I actually had a nightmare because of it.

RYAN: I suppose I do like nerve-wracking movies. But there’s something beyond creepy about the reality of a nazi rock bar in the middle of nowhere. I was actually nauseated at times because of how disturbing this is.

RYAN: Yes. It’s a very different role for the actor and he’s good – everyone in this is good. Imogen Poots, Anton Yelchin, Alia Shawkat who was one of the daughters from TV’s Arrested Development.

RYAN: Yes! We loved him in that movie. He’s very good. It’s really an ensemble cast and thinly about survival but more about the psychology behind being trapped. It’s a terrifying thought. I was lit’rally squirming in my seat at times and audible reacted at others.

CAROLINE: I don’t know if I could have handled seeing this one.

RYAN: The movie opens with a struggling indie rock band on tour, just living by the skin of their teeth and that aspect of young rockers on the road is a nice set up to the grueling experience they’re about to share, because you can see how they get backed in to a corner, even going into the situation. But then when the movie turns the corner into horror, it’s insanity.

CAROLINE: You often credit Funny Games as the scariest movie you’ve seen. That movie really got me too. We reviewed it together back in the day, though attended separate screenings. Did this one top that?

RYAN: No but it’s a similar vibe – that reality version of torture or the potential situation you could actually find yourself in – it’s a very real horror. You feel uncomfortable watching this but once you start, you just cannot stop watching. I don’t know if I could sit through it again, but I was glued for sure.

Thanks For Viewing The Green Room Review