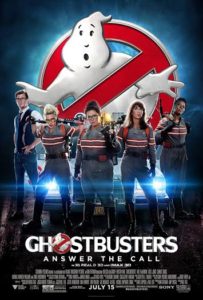 RYAN: Ghostbusters 2016! It’s the reboot of the classic 1984 film. Dan Ackroyd is an Exec Producer on this – he co wrote the first one and it’s based on that film. It’s better in every way. It so lovingly and beautifully pays homage to the original film, its stars and also to the 80s as an era. It’s simultaneously entirely modern in its humor, casting and setting. It’s bold and the effects are incredible. Having females lead the film actually improves the story.

BECKY: I’m not a fan of remakes and this really isn’t a remake. They’re never as good – but I loved this. It’s the perfect piece of nostalgia with the same type of humor and tone and I was so elated to hear that song and I ain’t fraid of no ghost!

RYAN: I agree. The music is so well done. The first thing you hear is the classic song. It’s just the balance between retro and today is perfection.

CHUCK: Yes the way it nods to the original is perfect, without taking away from the new story. And it is a totally new story. It has some elements from the first one.

CHUCK: Right – so anyone who’s worried they remade Ghostbusters, there’s nothing to worry about. They didn’t. But how they work the nostalgia into it is so smart. The success of this comes down to three things – the director, the writer and the cast.

RYAN: It’s Paul Feig who did Bridesmaids, Spy, The Heat… and he knows how to turn out a great female-driven comedy. The moment this film was announced, there was an outcry about it being made and then again about it having female stars. I can’t believe the sexist, bigoted, misogynistic backlash! I can’t believe we’re facing that in 2016. It’s heartbreaking that some people thought it sacrilegious to make this film with women.  And then people walked out saying it’s better than they thought it would be. I fully expected it to rock as it did.

CHUCK: And one of the many triumphs of this movie is that women are as good, if not better than…

RYAN: That’s just the thing – women have been consistently breaking the bank at the box office in comedy.

CHUCK: And now here’s an action comedy they’re taking over. They’re warriors and all four leads have equal parts – they all shine and compliment each other.

RYAN: I have to rave about Kate McKinnon. She is consistently getting great reviews and it’s so deserved. I was friends with her in New York, before she was famous, and I just remember her wanting to be on SNL and believing in her so much and then it happened and now seeing her on the big screen in a major summer blockbuster — it just gave me the most amazing chills. I’m so friggin proud of and impressed by her! It’s such a rare experience knowing some one who become a bonafide star!

BECKY: She’s outstanding. So hilarious – she’ll no doubt have a major career, even after SNL.

CHUCK: And Leslie Jones as well – this is a break out moment for her. She and Kate were even funnier than Melissa and Kristen.

RYAN: So much of what was funny about Kristen was her hair and wardrobe. That really worked for her character.

BECKY: I heard you both laugh out loud a few times and then it cracked me up. There were so many funny things happening, even in the background at times.

RYAN: You’re so right – there are layers and nuances to the characters that just never quit. Even Chris Hemsworth – pretty as he is in general – it really flipped the script on the secretary role.

CHUCK: This guy can do everything.

RYAN: He can play the dumb, pretty guy – and it can be viewed as a social commentary about male and female archetypes. I love that this film owns it – they even worked into the story the whole female backlash controversy. It’s terrifically clever.

BECKY: This movie was hilarious. It works on so many levels that I just loved it. And there are so many awesome cameos – practically everyone you’d want to see in this is in it.

CHUCK: There will be more. It’s so great. I wanna see it again in 3D

RYAN: You must stay through the credits because there is another scene after the credits. I loved it so much. It’s practically perfect. I wanna see it again in the theater.

Thanks For Viewing The Ghostbusters Review