Get On Up Review 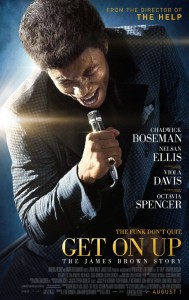 RYAN: I’ve been dying to see this move since I knew it was happening because I’ll always take a musical, or a movie with music, or how ever you wanna slice it, I’ll like it – but also because my cousin Leah worked on the production and also appear is in the film as an extra!

CAROLINE: That’s cool.  Did she have fun?

RYAN: The most and I’m happy to report you can see her in a few shots.  It’s so fun to see someone you’re close to in a movie.  I got a real kick out of it.  But now down to business.  This movie’s great.  And it’s not surprising since it’s directed by Tate Taylor, who did The Help.

CAROLINE: That movie is so good.  Is this the same or does he step up his game even more here?

RYAN: This movie is totally different.  Even though he cast some darlings from that film again – Oscar winner Octavia Spencer, Viola Davis and Allison Janney… all of whom I’d have liked to see more of, were exceptional.  It’s a very strong movie.

CAROLINE: Yeah they are all really good.  But it’s the story of James Brown.  How is Chadwick Boseman?

RYAN: A star is born!  I’m a fan of his.  I’ve liked him in all I’ve seen him do but he actually blew me away in this role.  There is no Chadwick.  He so fully became James Brown.  This is some serious Meryl as Julia Childs thing happening here – the way he moves and his voice, OMG his voice is outstanding in this.  It’s James singing but his own speaking voice – how he got it to sound so much like James Brown is beyond me.  He does this whole raspy mumble thing that if you actually listen to, you can barely understand, but it you just watch the movie, you totally get everything he’s saying.  It’s crazy.  He deserves a nomination.

CAROLINE: Wow.  Ok cool.  Though in the The Help, Tate helped some of his actors get nominated so it’s not a major surprise here.

RYAN: There were some woodsy scenes that were almost reminiscent of The Color Purple.  And the performance scenes are beautiful, like really trying to capture the essence of James while performing live.  I was really into this moments.  The cinematography in this movie is beautiful.  And the design – it’s a period piece and the sets and costumes – it’s like the recent Jersey Boys – very good.

CAROLINE: How are the costumes and makeup?

RYAN: Transformative.  They’re great and really help tell his story in a much more realistic way.  The film goes back and forth between his childhood and adulthood.  He had a really rough life and the movie is actually kind of sad.  I didn’t expect that for The Godfather of Soul.  But it’s always very interesting.  Music was such a huge part of his life – it was his life and it saved him many times.

CAROLINE: Yeah I don’t know too much about his life either.

RYAN: It’s cool because as you’re seeing the story of his life unfold, you’re also learning about what was happening in the music industry at that time.  The script is very clever.  The humor is subtle but there and it does this interesting, rare thing, breaking the fourth wall where James starts to narrate in the midst of scenes and looks and talks right to the camera, to you.

CAROLINE: That’s odd – was it weird?

RYAN: Not really.  You notice it but it’s done so week and so seamlessly in and out that it all works together. The movie is produced by Mick Jagger, who also is portrayed very briefly in the film so it must be a story he cares about immensely.  It’s a great movie and really such a tour de force by Chadwick.  I’m so beyond impressed by him.  How he nailed all that choreography and the voice and everything… It’s insightful, sad and entertaining.

Thanks For Viewing The Get On Up Review