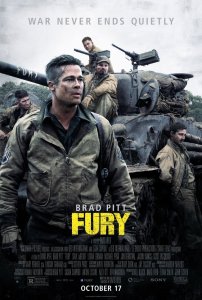 RYAN: You know as a rule – the only real genre that I can’t stand is war.  I mean, what is the appeal of being transported, for a couple hours, into a world of fighting and death?

CAROLINE: Yeah I’m not a big fan of war movies either.  They are popular though and this one has a great cast.  Was that a saving grace at all?

RYAN: Yes the cast is phenomenal and that made it mildly more palatable for me.  But I have to tell you – this movie epitomizes all I hate about war movies.  It’s heinous, disgusting, disturbing, horrifying, tragic, and awful.  I found it very uncomfortable and difficult to sit there and watch this movie.  War is an outrage.

CAROLINE: Honey, tell me how you really feel.

RYAN: This movie isn’t based on a true story, but still you know things like this happen in real war and that’s what so difficult for me.  These movies freak me out more than horror films because they’re real.  Like, there are some images in this movie, just like Saving Private Ryan, that you might always remember.

RYAN: It’s by writer/director David Ayer and he wrote Training Day and also directed End of Watch and I will say that this movie had me on edge the entire time… but I was desperate for a scene that would take you out of the mud, and the trenches and the tanks that these soldiers are in.  Finally there was one, but I was still feeling like I wanted to vomit the whole time because, it’s WAR!

CAROLINE: (laughs) That it is.  Sounds like it really got you.  But tell me already – how is Bradley Pitt?

RYAN: So good.  It did harken back a bit to his Inglourious Basterds role because he’s likewise all anti-nazi in this movie; but it’s a great performance.  The roles are all very well defined.  There’s Brad as the leader, there’s the jerk, Michael Pena as the ethic guy, Shia LaBeouf as the uber religious and then Logan Lerman as the newbie innocent.

RYAN: They were all pretty brilliant and well cast.  There’s also Jason Isaacs whom you know I love to see – Lucis Malfoy.

CAROLINE: Yes, we all know you appreciate the Harry Potter stars.

RYAN: Listen – I really hated watching this movie but my dad, who loves war movies, joined me at the press screening and he said it’s one of the best he’s ever seen.  And so I think if you like war movies, this one is a winner and to be fair, I must admit the film is very well done.  I hesitate to say I was entertained by it because I just don’t like war movies – with rare exception.  But this didn’t feel like two hours and fifteen minutes.  Oh – the climax is super frustrating but nonetheless a climax.

Thanks For Viewing The Fury Review