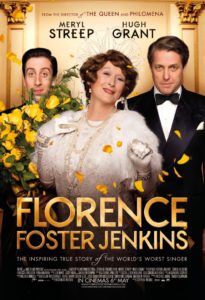 RYAN: This movie has one of the best trailers of the year. I’ve mostly stopped watching trailers, on the whole, but did catch this one and have been psyched to see it ever since. And the movie itself is terrific. It’s such a satisfying period film that is detailed in design but really stylized in the performances.

CAROLINE: Well it is Meryl Streep, after all. How is she?

RYAN: Clearly a rhetorical question. She does create another very different character and I love the voice he uses as this character; her speaking register. This is based on the true story of a socialite/philanthropist/arts supporter and lover in the 1940s and it’s an inspiring tale. It shows that anything is possible for a wealthy person.

CAROLINE: (laughs) Well did we really need a movie to tell us that?

RYAN: No but it’s funny how she basically accomplished her dreams because she had the financial means. I think what makes it all palatable is the fact she was such a fierce supporter of the arts and her genuine enthusiasm and love drove her. But what’s funny is the fact she was surrounded by “yes men” who never had the heart to tell her she sucked and she’s like one of those horrible contestants on American Idol who honestly doesn’t know she’s a bad singer.

CAROLINE: Well that was always a draw to the first few episodes of that show. It’s amazing that some tone deaf people just don’t realize they can’t sing.

RYAN: Exactly and they really play that here and it’s funny. And I love Simon Helberg, who is the other dude on the poster. His facial expressions in this film are priceless.

CAROLINE: Some of the costumes look really outlandish.

RYAN: They are. They’re very operatic and appropriate to who she thinks she is. She’s a woman of a certain age but music brings out something innocent and girlish in her and Meryl conveys that brilliantly. Her passion is like her art and there is also drama and sadness there that balances it all. It’s a life’s too short story, really.

CAROLINE: Sounds like it is touching. I obviously like to see anything Meryl does and this looks fun. Do you think she’ll get another Oscar nom?

RYAN: It seems like a given, doesn’t it? It’s like every time she makes a movie, that’s always a major possibility because she’s just so on the awards radar. But the time of its release – you never know.

RYAN: It’s a fun, lighthearted movie with a lot of heart.

Thanks For Viewing The Florence Foster Jenkins Review