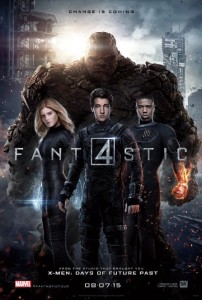 RYAN: This is the reboot of these Marvel comic characters, previously brought to the screen in a two-film series with different actors and a totally different vibe.  They came out before the real superhero movie renaissance that we’re now in and because the first two weren’t stellar and it feels like we’re getting a new superhero movie every month, I just wanna be, like, “enough already!”

CAROLINE: Seriously.  It’s becoming over saturated but at the same time, these movies do so well, that it makes sense.  Hollywood is all about the dollar.

RYAN: Too true.  But in spite of my bad’itude, I enjoyed this film.  It’s so much better than the first two.  It’s a worthy reboot and a big improvement.  The cast is so much better.  There were some decent people in the first ones, but Jessica Alba is the worst actress and she looks like a joke as a blonde.

CAROLINE: That was quite unfortunate.

RYAN: Kate Mara is great and so are Michael B. Jordan, Miles Teller and Jamie Bell.  It’s an origin story but really spends a lot more time developing their stories; from childhood on.   And it’s not just another reluctant hero story.  You actually feel sad and pained that they have these powers.  It very clearly comes from that perspective which is not as easy to do as the other way.

RYAN: It is good.  I did have a bit of a problem with some of the design and effects – in the other universe, it looks fake, like a set… it doesn’t look natural or believable at all.  The other effects were great though.

CAROLINE: Interesting.  I wonder why they couldn’t get it to look more realistic.

RYAN: And the villain is lit’rally the most evil, insipid super-villain I’ve ever seen.  His capabilities and desire to destruct are horrific.  It’s a good climax.  It’s not like an Avengers movie, by any stretch, but it’s good.  I liked it better than Ant-Man.

CAROLINE: Ok.  I wonder how it will do, in comparison, at the box office.

RYAN: So they way they’ve restructured this reboot is quite good.  It’s like a coming of age drama gone awry with a sci fi twist.  And there’s a real underdog theme that anyone can relate to.

CAROLINE: Universal themes are important in a mainstream blockbuster.

RYAN: It’s overall chewier.  There’s much more substance.  It’s not going to become anyone’s favorite superhero movie, but it’s well done.  It’s not a must see, but if you wanna see it, see it on the big screen.

Thanks For Viewing The Fantastic Four Review