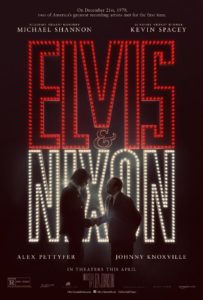 RYAN: This movie is pretty much summed up by the title and really isn’t much more than that. I think it wanted to come across as one of those “too wacky to be true/you can’t make this stuff up” stories but I wasn’t very entertained by it. It’s mostly boring.

KEVIN: I agree. I wasn’t into this at all.

RYAN: It’s basically about a meeting between President Nixon and The King – but there’s so much build up, where you’re just waiting for the fateful moment that seems like it will never transpire and then when it does, there’s barely a payoff. The whole movie is a waste of time.

KEVIN: It’s really not something we had to see and I especially think Michael Shannon was miscast as Elvis.

RYAN: I’d have rather seen a really good, no name impersonator in the role. Michael didn’t really pull it off. And the movie is mostly him. Kevin Spacey did a much better job as Nixon but in a much smaller role.

KEVIN: And it just wasn’t very interesting. I was pretty bored. For it being a comedy, I didn’t laugh even once.

RYAN: Yeah it’s not funny. The design is all good.

KEVIN: I liked the soundtrack but there wasn’t even one Elvis song – probably because of licensing fees.

RYAN: That was very interesting. It’s just about 90 minutes long but because you spend so much of the time waiting for something to really happen, it felt longer.

KEVIN: The rhythm did feel off.

RYAN: I really wanted someone to just tell Elvis he couldn’t get what he wanted.  It’s a story about the entitlement that celebrities feel and some don’t back down going after ridiculous things they way. Elvis was as delusional as the best of them.

KEVIN: It shows that some things never change in the world of celebrity.

RYAN: Colin Hanks and Even Peters play advisors to the president but both looked way too young to be taken seriously in those roles. That was very confusing casting. Better cast were Alex Pettier and Johnny Knoxville in roles as friends of Elvis. I wanted to like this and while Spacey’s performance is good, I feel like the film is a waste of time.

Thanks For Viewing The Elvis & Nixon Review