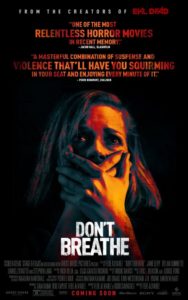 RYAN: This horror film is from the “makers of Evil Dead” which means it’s produced by Sam Raimi and that’s a good thing. You can definitely see his influence in this film. Expectations have to be low going into any horror movie because they’re so often bad and not scary. And while i won’t be kept up at night thinking about this film, it was very effective for its jumps and suspense. I was writhing in my seat – I might have bruised both of your arms. This film has some moments that brilliantly cross the line – without giving anything away.

ERIK: I’m a big horror fan but don’t normally like startling jumps, but you’re right that they were good here because they feel earned. The set up and staging of everything it so strong that it all plays together well. They do a great job establishing the ins and outs of where you are and they make very good use of the location.

RYAN: The cinematography is very good. Even the opening shot of the film sort of slaps you in the face with its tone. There’s a quite, intense bang.

NATHEN: There is a really good rhythm to this film. I like, in horror movies, where there is the ebb and the flow of the excitement and then the anticipation of it. The build up was always good here and then it led to something that pays off – in scariness or in story. It was all well executed.

RYAN: The sound design was all incredibly done too.

NATHEN: Yes – to the point where everyone in the theater and even on screen was silent. It really captivates you.

RYAN: We’re all hold our breath in sympathy. And interestingly, you’re identifying with the criminals at the beginning of the film because they are burglars. That’s a weird set up. You kind of feel like you’re betraying your own morality by empathizing with the protagonists of the film.

ERIK: Yes but I feel like I can’t say anything because we don’t do spoilers here. But they are breaking into the house of a blind man who adds another level.

RYAN: What we can say is that there is one of the most thrilling twists in a horror movie. There is a lot of terrific visual foreshadowing as well.

ERIK: You keep thinking the movie is this one thing and it does turn a corner at one point to keep going. That keeps it fun.

RYAN: It reminded me a bit of 10 Cloverfield Lane from earlier this year which I also really liked.

NATHEN: The story is really woven together with layers like a giant onion – it keeps going and you keep liking it.

RYAN: Dylan Minnette looks so much like Logan Lerman that I thought it was him. But no one is really that recognizable but they’re all really good. I like Jane Levy a lot – she’s from TV’s Suburgatory which I’ve never seen. And then Stephen Lang as The Blind Man is perfectly cast. Everything is in the eyes – the believability.

NATHEN: The audience – everyone goes along for the whole ride.

RYAN: I was totally freaked out by moments.

ERIK: The movie played the audience like an orchestra. Everyone reacted very well. This is one that’s good to see in the theater because you want the audience around you where everyone is into it. One moment is so bizarre and ridiculous.

RYAN: It crosses a line and is shocking but I was so disgusted and glad that it did because it’s just so wrong! It’s evil to even conceive of it! It’s, like, what will become an iconic horror moment – movie legend. So nasty.  There was only one part that was really not believable. But it’s great. This has been a good year for horror.

Thanks For Viewing The Don’t Breathe Review