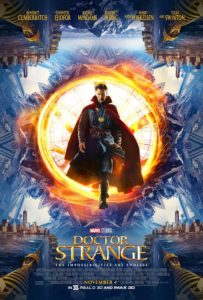 RYAN: I think I have a new favorite superhero! It’s the latest Marvel superhero movie but seems a lot more like a fantasy action film. It somehow folds into the Marvel universe, which we glimpse into in the first of two after credits extra scenes. It’s not funny racy like Deadpool, but has comedic lines. Benedict Cumberbatch does such a great American accent – I’d never know he was British. There’s so much magic in this, it may remind you of Harry Potter or Miss Peregrine. There’s time travel. I’m happy to be joined in this review by two of my comic book geek pals, Michael Weiss and Noah Hildebrandt. What did you boys think?

MICHAEL: It was like Constantine. I actually thought it was more superhero-y than a lot of other Marvel productions. It reminded me of Superman 2. Some specific scenes made me think of it, and not only the red cape.

NOAH: I didn’t get that but now that you mention it, I can see that. I think the ending sequence was a very unique one where they do a very cool trick with time.

RYAN: We have to talk about the special effects. All the superhero films have amazing effects but what I love about them here is they’re not only used in the action scenes, but they’re also used in the storytelling. It’s sorcery that furthers character development and plot. I just love that. And there’s also some rainbow-hued intergalactic-ness, like you’re inside a kaleidoscope, that I really enjoyed. Tilda Swinton as The Ancient One is one again very good.

MICHAEL: It was like Inception on hallucinogenics.  The city folds onto itself.

NOAH: But it was taken to 11. If you see the trailer and you think you know what to expect, you have no idea how far it goes. And I can’t even imagine what it took to choreograph the fight scenes that take place on multiple planes of space and motion. It’s so complex and cool to see. But as amazing as it all is, the end sequence looked like the lowest CG I’ve seen in years.

RYAN: Are you talking about the boss fight? As if it were a video game.

NOAH: The ultimate evil here is Dormammu. And he looks nothing like he does in the comics.

RYAN: He did sort of look like a villain that popped out of My Little Pony.

RYAN: Even in 1939, they made the giant head of The Wizard of Oz look more menacing than this character.

NOAH: I heard someone else say the same thing.

RYAN: His powers were cool but his face wasn’t what it could be.

NOAH: Dormammu is a big deal in the Marvel universe and this depiction didn’t do him justice.

RYAN: Chewitel Ejiofor plays a character that sounded like Mordor. What’s his name?

RYAN: Is The Ancient One female in the comics?

NOAH: No, in the comics, he’s a racist Tibetan character. Some fans were up in arms about Tilda’s casting but it’s also more appropriate for today’s sensibilities.

RYAN: One of my favorite things in the movie was the cape – it’s almost like the magic carpet in Aladdin. And then it has, like Harry Potter magical properties. I want that cape. It had personality, emotion, protective qualities.

NOAH: It was some comic relief.

RYAN: Don’t we always think Marvel does that better than DC?

NOAH: It’s within the top 5 Marvel movies for me, but they change that character a lot. He’s a lot more serious in the comics. I love the movie but Marvel’s formula is really showing.

RYAN: But is this a symptom of too many superhero movies coming out too quickly or are you just too attuned as a fan? And how did they get through the whole script without calling him a witchdoctor?

MICHAEL: (laughs) It could have used more time and a montage to get through the middle and explain some of his skills and sets.

NOAH: I didn’t feel his emotional attachment to The Ancient One.

RYAN: Rachel McAdams was, as expect, perfection. I love her in everything she does!

MICHAEL: She’s good. This movie is different.  It’s like an in-between movie for The Avengers.

NOAH: It reminds me of the original Iron Man. And I wonder if Marvel is just setting up for a new group of heroes taking over the mantel.

RYAN: I loved this. I’m fascinated by magic and wizardry so I love Doctor Strange. If we’re calling him a superhero, he’s my favorite. But LBH – let’s be honest – he’s a sorcerer. I could easily sit through this again. We’re oversaturated with superhero movies, but this one still stands out.

Thanks For Viewing The Doctor Strange Review