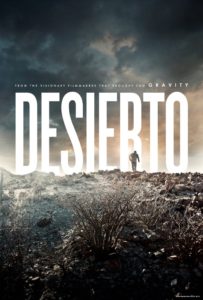 RYAN: Desierto is Spanish for Desert and that’s where this film takes place. Written and directed by Jonas Cuaron, who cowrote Gravity with his father, Alfonso, this is one messed up movie – in a good way. It’s like watching someone go human hunting. It’s horrible. Not the movie – but the concept.

RYAN: Yes. It’s traumatic. It’s a very violent, disgusting thing to watch but at the same time, it’s a good movie. It’s a “run for your life” story centering around a group of characters making a run for the border but as they do so, get hunted down by a jerk played by Jeffrey Dean Morgan.

CAROLINE: Loved him as Denny on TV’s Grey’s Anatomy.

RYAN: He is good but you can’t help but hate him in this. He’s a serial killer in this film.

CAROLINE: I can’t image just running for your life in the middle of the desert.

RYAN: It’s really one of the more disturbing things. I realize I’ve said I like disturbing movies but not on this level where it’s just carnal evil.

CAROLINE: Yeah I feel Like I’d be covering my eyes for much of it.

RYAN: Completely. I did not but it is certainly hard to watch. And then when they’re not being man-hunted, the nature is vicious too. The film is in English and Spanish with subtitles. Gael Garcia Bernal plays one of the men on the run. I like him.

CAROLINE: He’s great and was in Y Tu Mama Tambien, directed by Alfonso.

RYAN: Yes! He’s good. This movie has a starkness and rawness to it – like you can feel the dryness in the desert. It’s the badlands. This isn’t where you go hiking. There’s also a dog in the movie, that is worth mentioning but he’s much more Cujo than Lassie. This is one dog I didn’t like.

RYAN: This is one to see in the theater – it’s like reverse claustrophobia because theres no where to hide. It’s the big wide expanse and you can’t outrun a bullet. It’s crazy.

Thanks For Viewing The Desierto Review