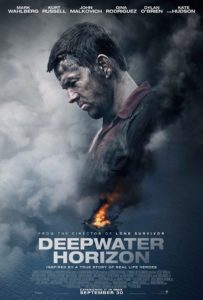 RYAN: This is based on the true story of the worst oil disaster in US history. I was so nervous during this movie that I – more than in any other movie – shouted out, “Oh God! Oh God!” during this film. I was cradling in my seat it was so upsetting. It’s such a disaster and crazy that it could have been avoided. I couldn’t believe how painful it was to watch, but like a train wreck, you cannot look away.

RYAN: BP is the company – I will never fill my car up with gas at a BP station again, after seeing this movie. It’s disgusting, how they are portrayed.

NATHEN: I like that they pointed out some of the financial details in the movie – how much the company makes in a year, what the cost to avoid this catastrophe could have been…

RYAN: People cut corners to save money all the time; but not when lives are at stake. There’s a difference there. The stakes are different. Safety concerns on a construction site or oil rig – people can die.

NATHEN: Absolutely. In medieval times, lives were the cost of war. This isn’t war. This is business.

NATHEN: They didn’t value the risk of human lives.

RYAN: BP – those greedy bastards! I can’t avoid Titanic comparisons here because it takes place on the water. It’s like Titanic meets Backdraft. It’s a horrible event and even though you know it’s coming, you cannot prepare for what you see. It’s claustrophobic, underwater, sinking, explosive feeling.

NATHEN: The main difference is the fire. You can’t outrun fire. Water you can swim in, but fire is another level of danger. That’s a serious fear of mine.

RYAN: It’s my greatest fear. And unlike Titanic, where it seemed they had a couple hours to know it would sink – in this film, it’s all very fast and there’s barely any time to think or try to survive. It’s all instinct.

NATHEN: Yes. They had no idea what was happening. That element alone is horrific.

RYAN: The effects are so good.

NATHEN: Combined with the sounds, you’re pulled into it. It’s like you were there.

RYAN: It’s so scary. This, to me, is scarier than a horror film because it actually happened and it’s real. This is why I choose to not work on the water.

NATHEN: (laughs) One thing that kept ringing true to me was the heroic aspect. Seeing the people who rose to the top – going out of their way to try to save others. It’s amazing and makes you think how you’d react in the same situation. It’s a true testament to the good in mankind.

RYAN: Mark Wahlberg is great. The script is good and has some nice comedic moments with the characters at the top. Kate Hudson grounds it a bit too. And the kid form The Maze Runner, Dylan O’Brien.

NATHEN: I liked him. He was very convincing. And they all help you care more about them.

RYAN: But there’s this awful, looming sense, waiting for it to al hit the fan, like when you watch Titanic. I was almost sick, just waiting to see what would happen.

NATHEN: From the moment it starts, you’re worried about them.

RYAN: The suspense and anticipation is maddening.

NATHEN: I liked how the film begin – they incorporate reality with the real audio form the trials.

RYAN: Kurt Russell is outstanding and then John Malkovich is the best at playing bad in this. You root for him – in the wrong direction, if you know what I mean.

NATHEN: You hate him.

RYAN: You an’t help but hate him. And the beginning of the credits were great because it honors those who died in this tragic event. Did you cry?

NATHEN: I did a bit.

RYAN: It’s incredible on the big screen – you’re a part of it. It’s like you could get PTSD just witnessing it.

Thanks For Viewing The Deepwater Horizon Review