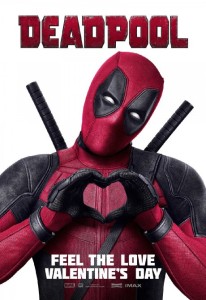 RYAN: Deadpool is a Marvel comic book hero I was completely unfamiliar with aside from hearing my 13-year-old nephew talk about him. I’m always leery of heroes I haven’t heard of before but I suppose I shouldn’t be because these big screen adaptations have become so consistently reliable.

CAROLINE: Yeah it’s remarkable how it’s become the most lucrative of all movie genres, aside from, of course, Star Wars.

RYAN: Yes – and what’s unique and fun about Deadpool is its R rating. It’s so adult – the language, the sexuality – it does not refrain for a moment. You know from the star what you’re in for. The opening credits are sarcastic and hilarious – and that tone remains throughout the film. It’s a better comedy than most actual comedies in recent years. I LOLd so much more in this than movies that are straightforward comedies.

CAROLINE: That’s nice to hear. I know with you laughing is like crying – it’s rare you actually do it out loud.

RYAN: And Ryan Reynolds really redeems himself after The Green Lantern – which I liked but didn’t hit. This will hit. And I bet many fans will attend repeat showings. I could easily sit through it again. The tempo of the film makes it so easy to watch and aside from a section that’s to do with the character’s origin, it really is comical all the way through.

RYAN: The makeup is good and you’re glad this hero wears a mask – which is germane to the story but Ryan’s casting is key because much of his performance is voice over and he sells it beautifully. The character’s deadpan, humor and wit is refreshing. It really is the first comic book movie for adults – they really went all out for it and it takes things to a unique, new level.

CAROLINE: So who is Deadpool.

RYAN: Well he’s really a part of the X-Men, so he’s a mutant. But due to studio licensing and politics, there’s not inclusion of others – but there is much talk of Hugh Jackman and Wolverine.

CAROLINE: So they break the fourth wall?

RYAN: And beyond – this is the most meta movie I’ve ever seen! It’s so completely self-referential and hyper aware of it being a movie in of itself. It’s crazy cool. And when I spoke with my nephew about it he said that’s typical for this character – that in both the comics and the video games, Deadpool is aware he’s in a comic and a game. I just find that really different and it’s written so well that it works fantastically.

CAROLINE: That is quite unique.

RYAN: He’s so wisecracking, even during the action, that the momentum keeps you on edge. It’s a great action film too. The effects and physicality is all well done too. It’s dirty, funny, and a new favorite superhero. There’s an after credit scene, of course. So stay till the end.

Thanks For Viewing The Deadpool Review