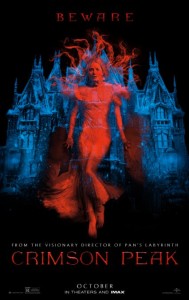 RYAN: I’d ike to welcome Karrie Grobben to the site – it’s her first review with me and it’s the perfect fit because she’s currently writing a thesis on representations of girls and women in fantasy entertainment.  Crimson Peak is a gothic romance and a fantasy horror.

KARRIE: Thank you.  This film is perfect because I have a chapter in my thesis about the intersection of gothic and fairy tales.  This film brilliantly falls between the cycle of films form the 1940s following young, innocent girls and an adaptation of a certain fairy tale from 1697, which I won’t go into because it reveals plot spoilers.

RYAN: Yes we mustn’t do spoilers.  This has been my year’s most anticipated film so my expectations could not have been higher.  I was so crazy-excited for it that I avoided all trailers and commercials.  I’m thankful I did.  I love this director – Guillermo del Toro.  I also love this cast.  My expectations were all met.  It’s dripping with elegance.  It’s sophisticated.  It’s a world you wish you could live in, minus the horror aspect.  I didn’t want it to end.  I loved it.  The storybook quality to it is absolutely a treat.

KARRIE: The impact of this film makes it a must see.  The costumes, the set, the cinematography and free movement around the space is all visual pleasure.

RYAN: Indeed.  This is one where you could pause the film on any frame and enjoy it as a work of art.  I’d like to see props and costumes on display at the Costume Exhibit in Hollywood.  These are the best costumes I’ve seen since Bram Stoker’s Dracula, which won the Oscar.  Here they were designed by Kate Hawley who previously did Pacific Rim and Edge of Tomorrow.  Who knew she had this in her? Outstanding!  Horror isn’t often awarded or recognized but this film deserves it on many levels.  I love every performance but Jessica Chastain – holy cow!  She’s such a gifted actress.

KARRIE: She’s brilliant. Her character is so ominous.

RYAN: You jump a couple times so the horror aspect is there but it really takes a backseat to the gothic romance aspect.  It’s not the typical scary movie.  Especially with all of the lazy, cheap, found footage horror movies of late, it’s just delectable getting a classic horror movie like this. The scare factor is cool and not as overdone as the zombie or vampire.

KARRIE: The parts that scared me were not as much the horror aspects but the actions of the humans in the story.

RYAN: Absolutely.  It’s very well done that way.  If you pay attention to certain clues early on, the movie becomes quite profound by the end.  Great seeds are planted.

KARRIE: Yes. There’s so much emphasis on vision and the power of looking at things.  Charlie Hunnam plays an ophthalmologist.  Mia Wasikowska looks at things another way. And there are other details that all add to that – even the editing of the old fade to black editing down to a circle.

RYAN: That was brilliant.  It’s thematically about what e’re seeing, visuals, but simultaneously so visually enticing – it’s like the horror version of Moulin Rouge.

KARRIE: I saw references to Gaslight and Rebecca, Jane Eyre, so many others.  We’re looking through the camera lens. Some people saw things coming.

RYAN: It’s brilliant.  I didn’t find it predictable.  If you’re sitting and analyzing in your own head you’ll either get it right or not and then judge that experience. Whereas if you’re just living in the moment and watching the film unfold on its own terms, you’ll love the ride. I was hanging on the images – the scenic design, the primary colors… it’s the most effective use of red since Schindler’s List. I got out of my head to just enjoy it.

KARRIE: Yes but the blueprint is also there from the typical ’40s movies and there’s a tradition to what we’ll expect and you may be right or not on what you think might happen.

RYAN: The romance and the period is as good as The Age of Innocence. The chemistry between the actors is insane.  I felt it.  The cast relates so well together.

KARRIE: It all feels so right and pleasurable.  It’s about time we return to the gothic romance.

RYAN: Tim Burton has done gothic but he’s so stylized in a cartoonish way.  Del Toro is as recognizable for his aesthetic sensibility as Burton, but more sinister, heightened style. It’s not over the top.  It’s heightened.

KARRIE: You’re invited to view this as the real world and as a dark tale.  I really enjoyed it very much.  Hair and costumes also tell a story in this film.  It’s all dense with meaning.  It’s very clever with all of its references to literature and classic films and with modern twists – so smart and rich.

RYAN: I want to see this again in the theater. It’s a Guillermo del Toro masterpiece.  I wish it was in 3D.  I will own this.  It’s not the scariest horror movie, but it’s my favorite.  It’s twisted, wicked and stunningly beautiful.

Thanks For Viewing The Crimson Peak Review