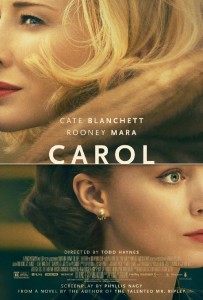 RYAN: This is the drama that’s getting an incredible amount of awards buzz – already garnering wins and nominations for leading ladies Cate Blanchett and Rooney Mara. We were both excited to see this; especially since it’s our first movie together in over a year! But it’s really not what we expected.

CAROLINE: The Weinstein Company is not submitting both actresses in the lead category because that would be unacceptable for a movie about gay people, as we saw with Brokeback Mountain.

RYAN: (laughs) They’re just trying to prevent them from competing against each other.

RYAN: But I think Rooney is really the lead but they’re putting her in the Supporting.

CAROLINE: Yes. As for Cate’s performance, I saw elements of Blue Jasmine.

RYAN: I see Blue Jasmine now in everything she does – except her Stepmother in Cinderella.

CAROLINE: But overall, for both of us, this movie was a disappointment.

RYAN: Here’s why – it’s extremely slow moving. There are great breaks throughout the film without any dialogue and the score is slow and soothing. There’s a bit of harp. There’s some cello and piano in there.

RYAN: And I was either wanting to take a nap or just looking for some actual drama that really doesn’t happen until the third act.

CAROLINE: If you have insomnia, this is the movie for you. I don’t want to be harsh, but with all the Oscar buzz it’s gotten, I was expecting more.

RYAN: Agreed. Not that all movies must be exciting, but I hoped it would be more dramatic. It’s sad and the tone is a downer. It’s good to see these actresses put themselves out there that way, but there’s also the Julianne Moore, Ellen Page lesbian drama out this season called Freeheld, but it didn’t garner the same kind of buzz.

CAROLINE: One thing we both enjoyed was the attention to detail of the period. It’s extremely well shot; looks great – all the cars and hotels.

RYAN: It’s appropriately timed for Christmas with some of that going on.

CAROLINE: The old department store feel, the costumes – all great, but that can’t save the movie from being kinda boring.

RYAN: Right. It wasn’t kinda boring. I was outright bored the whole time. And as a gay man m’self, I was confused by some of what was going on. You’re able to figure it out but they leave much of it up to you to piece together. We had to talk about it.

CAROLINE: They purposely left some mystery to the relationship but it made it not very satisfying. And I was never really sure why they were together.

RYAN: That’s just it – I really never felt any connection between them – even when they first meet. And if you can’t perceive that in the audience, you can’t buy the whole film.

CAROLINE: I did appreciate the casting of real life lesbians Sarah Paulson and Carrie Brownstein. But other than that, I’m left unimpressed.

RYAN: I feel the same way. It’s worth it for the Oscar buzz.

CAROLINE: We’ve seen better from both of them.

Thanks For Viewing The Carol Review