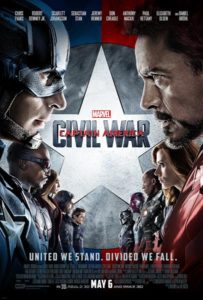 RYAN: This movie is like a king size candy bar. It’s more of a good thing and I’m calling it – it’s really an Avengers movie more than a stand alone Captain America. I love the whole #TeamCap versus #TeamIronMan, fresh off of Batman v Superman. That standoff between two of the greatest heroes was one thing and now we have superheroes picking sides and creating teams. It indeed is a Civil War.

KIM: My mind is blown! The opening scene, alone, was nuts! The full-on action is so cool. It’s great having these guys back on the big screen. I was in love with Batman v Superman and now I’ve come back to Marvel.

RYAN: And we don’t need to necessarily compare them, but why not. They have very different vibes. Marvel is lighter and more comical. DC is darker and more serious. They have their own strengths. Both are strong and fantastic.

CHUCK: I agree – both studios can live side by side, but I think Marvel makes DC look amateurish. I was breathing faster in this film. My jaw hurts from dropping it while watching.

RYAN: I disagree about DC looking amateurish. Those movies are intense, hearty and deep. But the fluffier variety here is a different kind of entertainment. Part of Marvel’s brand, as fostered by Joss Whedon in the Avengers films, is the levity strewn throughout. He didn’t do this one but that sensibility still applies here.The whole team is great. I was so wowed by that incredible effect early on where we see RDJ younger. It was the first time my jaw dropped.

KIM: How in heaven’s name did they do that? The effects couldn’t be better in this movie. And the 3D conversion is excellent. I haven’t seen one as good lately.

RYAN: 3D conversion has finally arrived. It has finally caught up, looking almost as good as the movie film in 3D. But every actor is so strong – they continue to grow into these roles, from Scar Jo to Chris Evans, Sebastian Stan… I was wondering whether Emily VanCamp, formerly of TV’s Revenge, would be there since she appeared in the last Cap movie and I was glad to see her and she had some meat.

CHUCK: To have so many characters in a movie and not feel like any of them got swept under the carpet is a really wonderful achievement.

RYAN: And the real big coo in this film is at long last seeing Spider-man join the ranks of the Avengers. His introduction is genius. He’s clearly the best-cast Peter Parker to date. And it’s so perfect – and appropriate – that Sony and Marvel finally worked out the legal issues to get him to appear in these Disney films. I loved it! Tom Holland is the third actor we’ve seen in the role in a short amount of time. He holds his own against RDJ and he’s a scene stealer.

KIM: He was amazing on screen. I didn’t know who Tom Holland was and he seemed to come out of nowhere and he’s the best Spider-man.

CHUCK: I totally agree. And the whole cast is so strong. The script is tight and the special effects are seamless.

RYAN: The action was all so terrific – whether it was a choreographed fight scene, or action in the air, in the sky, on the unground, underground, in an elevator shaft – or in a car chase or on foot – it’s all so meticulously orchestrated; not only the movement of the actors but the cinematography. So well produced.

CHUCK: Yeah you definitely see things never before seen in an action sequence. Who thinks of these things?!

RYAN: You hold your breath.

KIM: I love the cast. From the first Iron Man to where it is now, every single bit of casting has been spot on.

KIM: It was brighter.

CHUCK: Maybe she was doing her fall palatte.

RYAN: Well it’s Spring, honey. There is a civil war, indeed. And there was a part of me that felt dejected and hurt when the heroes Captain America and Iron Man split and take sides and fight each other. It feels so wrong. I mean – if the superheroes can’t get along, where is the hope for the rest of us?!

CHUCK: And you could easily side with either of them – the script was so clever at making them both have merit to their perspectives. Really well done. No one was in the wrong. I will say there’s a lot of death so it’s PG-13 and not for little kids.

KIM: Yeah it’s a heavy storyline for kids. I feel like I say it every time, but once again, this is my favorite.

CHUCK: This is a culmination of everything that’s so great with Marvel and makes me hopeful for the future.

RYAN: I loved it. You don’t really miss Hulk or Thor. It’s a thrill ride.

Thanks For Viewing The Captain America: Civil War Review