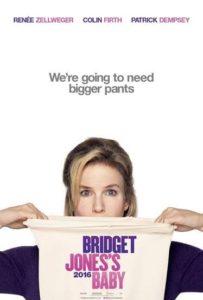 RYAN: 12 years after Edge or Reason, and 15 since the Diary, comes the third installment of the franchise and it’s really great to revisit these characters.

CAROLINE: Even after Renee’s been through the ringer with her face.

RYAN: (laughs) Yes but she looks fantastic in this movie.

CAROLINE: It might have been filmed prior to her BPS though.

RYAN: Who knows. But that aside, it’s great. I actually LOLd more in this rom com than I do in most comedies.

CAROLINE: That’s something coming from you. You’re not one to often crack up.

RYAN: Exactly. But there are a lot of funny moments. As a character, Bridget has always been a bit of a goofball and embarrasses herself often and while she has certainly come into her own – she’s still very endearing and relatable. And she still has some awkward, cringeworthy moments.

CAROLINE: That is sort of the allure of her, isn’t it? How’s the addition of McDreamy?

RYAN: So good, he’s just Dreamy! He’s very charming and easy to look at, as per usual. And his character has everything going for him. So does Darcy, aka Colin Firth, because he’s been in it all along. They all have such palpable chemistry. I was rooting for both of them. It’s the perfect “torn between two lovers” scenario.

RYAN: No. They explain his absence. Also – Emma Thompson is such a scene stealer. I just love her so much. You wish there was more of her in this.

RYAN: She was so funny, I wondered whether she improvised some of her lines. She is a writer, you know.

RYAN: I loved the supporting cast and since she plays a TV producer, I found her uniquely relatable for people like us, who have held that position. It’s truly a fun movie. I’d go so far as to say it’s my fave of the trilogy.

CAROLINE: Do you think there’s room for a fourth?

RYAN: Sure, why not? You know if it does well – that’s always a possibility. In the words of another Zellweger movie, it’s about about “the kwan.”

Thanks For Viewing The Bridget Jones’s Baby Review