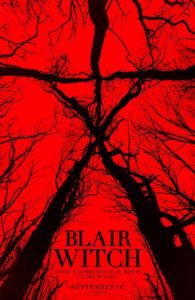 RYAN: I’d like to welcome Luke Hammond to this review – Harry Potter brought us together as friends and he likes movies as much as I do. And you were graciously willing to join me at the press screening for this horror film, so welcome to my website. Let’s dissect this film. You recently rewatched the original Blair Witch Project.

LUKE: I did and I read some things about how the production team kept this new film under wraps for a while, not wanting to reveal it was in this franchise. That was an interesting thing.

RYAN: I saw the first film in the theater in 1999 and didn’t fall under its spell, pun intended.  But it did launch the sub-genre of horror which is the found footage, shaky cam. It was sensational. People believed it to be true. Some people are annoyed that these are difficult to watch and this new one is as annoying. They’re in the woods, it’s edited in an erratic way. It’s difficult to watch but overall, I liked this one better than the first two in the franchise. It’s still very intentionally amateur looking.

LUKE: That is just the genre though. There’s something claustrophobic about your view being very narrow and they manage that well in this film with the first person camera attached to the ears. You’re seeing every head movement. And then they switch between quality of film too. I felt more claustrophobic in this one. And one scene, in particular, where it is the tightest, was the most awful part for me.

RYAN: Yes, without giving away spoilers, that was a rough moment to witness. There’s also some gore and grossness that I couldn’t stop looking at. This movie improves upon the original and the Paranormal Activity movies in that stuff actually happens earlier in the film. It’s not just boring nothingness then a climax at the end. I appreciate that aspect. In the first one, it was all build up until they finally get to the house. This one has some jumps throughout. And I liked the character development. The role of Peter brought some nice humor to the film as well. I liked that they took the time to establish these characters and their relationships so you care about them a bit more.

LUKE: I agree with that. Interestingly, the two main characters were not developed as well as the others. That was strange.

RYAN: Totally. But I think the first thing I said to you after the movie was that the payoff wasn’t enough for me here. I would have liked more information about the mythology and what’s really going on. It is good use of lighting and sound design though.

LUKE: There was a lot of loud thumping we heard throughout the forest, which was the least interesting because it was the least subtle. I was bored at the beginning but it got bit better.

RYAN: The things that were intended to be scary didn’t frighten me and the only times I jumped were due to manipulative editing. That’s a major peeve of mine in a horror movie. Were you scared?

LUKE: I wasn’t. I think scary movies are when you don’t wanna watch the next scene. They cause anxiety of what’s to come and I didn’t experience any of that in this one.

LUKE: They could have played some scene in a more intense way but it wasn’t.

RYAN: The last movie to scare me was. The Conjuring 2 where I cried fear tears. And it was absolutely brilliant. You have to see it. It’s now my fave horror movie of all time. I wasn’t scared in this either.

LUKE: But this movie is a bit unnerving. You get the squirmy feeling. And a lot of that wasn’t because of the witch. It was just bizarre stuff or editing or the way it’s shot. But we’ve seen a lot before. So playing on human fears and being powerless was something they wisely played upon. It definitely proved upon the theme of the first one but we’ve just seen so many found footage movies since then.

RYAN: Aside from the surround sound, it really doesn’t justify a big screen viewing. This has been the best year in horror in ages and it’s not because of this one. There are better movies now playing to see on the big screen.

Thanks For Viewing The Blair Witch Review