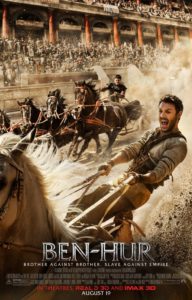 RYAN: This is a remake of the 1959 Charlton Heston classic that immediately felt so redundant it begs the question, “Why?” But it’s has its pros and cons.

RYAN: Well it opens feeling a lot like a Soap Opera version of a Biblical epic. It’s melodramatic and riddled with amateur production value issues like poor editing, awful sound syncing, cringe-inducing looping, and even some questionable costuming where a couple people look like they just walked out of shopping at the Gap.

CAROLINE: (laughs) Oh God, really? How is that possible?

RYAN: I was astounded that it was on screen in this because much of the rest looks beautiful.  Some of the wide location shots are breathtaking.

CAROLINE: I thought it did have a nice, epic look, in the trailer, anyway. But I was questioning why remake a classic.

RYAN: Perhaps because they can do much more with effects now and someone on the team was passionate about the story. There is one scene, about an hour in, on a slave ship, that is such a showstopper – dazzling, incredible effects. I started to really get into it and was very entertained at that point. So there is quite an about face in the middle of the movie.

CAROLINE: Interesting. Could it be that a movie about redemption be redeemed, itself?

RYAN: Somewhat. It’s still not amazing but the climactic chariot race scene is outstanding. It’s suspenseful and awe-inspiring. It would give today’s Olympics viewing a run for its money.

RYAN: So it’s pretty balanced between unwatchable and entertaining. So I’ll have to rate it down the middle.

Thanks For Viewing The Ben-Hur Review