Behind the Mask: The Batman Dead End Story Review 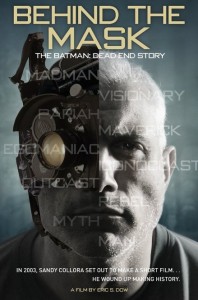 RYAN: This is a new documentary written and directed by my friend Eric S. Dow, someone I’ve worked with for many years at major TV networks. It’s his second feature-length documentary. I was impressed by the first one but I’m even more so by this one. I’m proud of and impressed by him as a strong storyteller and as a filmmaker. He never compromises production value.  This doc is fantastic and it’s for anyone who likes Hollywood history, movie history, comic-con, Batman and the like.

RYAN: And I’m thrilled to have you join me in this review, Michael Weiss, because you are The Batman Guy!

MICHAEL: I am a huge fan.  And I remember in 2003, when the rumors of Batman: Dead End reached the internet, when the news of it appearing at Comic-Con swirled around.  I was the guy who ran to an internet cafe to have the best internet quality for streaming to witness it myself.

RYAN: This documentary chronicles the creation of and cultural impact of a short film called Batman: Dead End, directed by Sandy Collora, that had a ginormous impact at the 2003 San Diego Comic-Con, instantly becoming a legend of the event’s history.

MICHAEL: …and really in comic book movie history. It’s really a movie for the fanboys and something that in many ways addresses the true fan’s desires more than what Hollywood puts out in big, mainstream blockbusters.

RYAN: Batman: Dead End incorporated the character of Batman battling Aliens and Predators which are two iconic movie horror characters. We see lots of sequels.  We see lots of franchises being rebooted but this short film was a real mash up.

MICHAEL: Yes and it’s like Freddy vs. Jason, The Avengers all coming together, soon the Justice League is going to be coming together The subject matter that makes this documentary really necessary is it brings together all of those nerds that were working on those movies to make this as a labor of love. Many of the people who worked on it had previously contributed to movies like RoboCop, Abyss, a lot of stuff from Steven Spielberg.

RYAN: This documentary has two basic parts: It is the conception, making-of and impact of Batman: Dead End, but it’s also the story of Sandy Collora who made it and what it did to his ego and career.  Sandy’s a remarkably interesting guy. His life certainly warrants a documentary.  He’s a creative genius. He’s almost more brilliant than most people can handle and I think along with that comes a confidence, and a dose of narcissism. Some people in the film called him egotistical or conceited; that he lacked humility, but I think it’s part of the puzzle that makes him the artist that he is.

MICHAEL: And his story illustrates that he was probably born to be a leader more than a team player. There isn’t necessarily anything wrong with that. There are certainly people who have accomplished much less with more insane egos.

RYAN: But he also walks the walk. It’s not like he’s just puffing his chest. There are so many people in this film that talked about how meticulous he was in planning and organization and that things went so well. There were all these “happy accidents” in the filming of Batman: Dead End, but they’re really not accidents when it’s that well planned.

MICHAEL: In 2003, every comic book fanboy that was aware of Batman: Dead End.  And after seeing it, the number one question was “What would Sandy do next?”  I was wondering it back then and I’ve always wondered – this doc answers that question and it’s kind of sad but also makes sense.

RYAN: We can’t do a spoiler.  You have to see it to find out the answers but what I will say is that I found it inspiring how everyone around Sandy, while he was making the short film thought his ideas were impossible, yet he pulled it off. He explains it’s because he invests in himself. That’s a bold statement.

MICHAEL: Absolutely. And you have to admire that he did it on his own terms.

RYAN: As for this doc, itself, the lighting and design during the interviews were all very creative and cool. The graphics looked so comic-booky – very appropriate and cool and edgy. The score was fantastic and the energy in it is really good.

MICHAEL: And as a comic fan boy, I found it very cool that this doc takes you into the homes of all of these nerds in the biz.  You get to see all of their collections. I was constantly scanning the background for masks of certain films that I instantly recognized and books that were on the shelves and toys and action figures that were set up all over the place. Because it reminded me of my own living room.

RYAN: One of the highlights of this documentary for me is learning that initially Sylvester Stallone was cast in the role of Batman in Batman: Dead End.

MICHAEL: And that would have been so cool!

RYAN: It didn’t happen so that is now a Hollywood legend story but also Sandy does a killer Sly Stallone impression. It’s almost as if Sylvester Stallone was being interviewed for this film but it’s just Sandy doing his voice so well.

MICHAEL: That was awesome.

RYAN: I have to ask you, what did you learn about Batman or anything about this character’s universe watching this documentary that you didn’t know already?

MICHAEL: I just always imagined it was just Sandy but this doc illustrates how he pulled in a lot of people who were very influential in Hollywood and who sort of made you think, like, “Yeah, these people do talk to each other and these people are all influenced by each other’s designs and work and they all know each other.”  That was my favorite part of it.

RYAN: One of the things that I also love about this movie is how it proves that opportunity is not a lengthy visitor and it brings up an interesting conversation about whether Sandy stood in the way of his own success, to a point.

MICHAEL: He didn’t want to compromise and I think that’s awesome. I think that really follows in the footsteps of James Cameron, who was a truck driver when he saw Star Wars.  And James Cameron, in a technical sense and in a critical sense, he has never made a bad movie. And Sandy definitely didn’t want to make his first feature length  film a bad movie. He’s more of an artist.

RYAN: The superhero genre is the most lucrative right now.  We’re experiencing a superhero renaissance in Hollywood and this doc is coming out at the perfect time to capture the lighting in a bottle moment before the genre became everything it is.  Behind the Mask is a fascinating look what it takes to make a Superhero – figuratively and literally.  It’s available now on iTunes, Amazon, Hulu, Vimeo…

Thanks For Viewing The Behind the Mask: The Batman Dead End Story Review