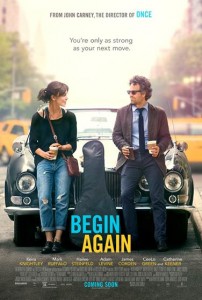 RYAN: This is the new original movie musical from John Carney, the same writer/director as the movie Once which was adapted to the Broadway stage where it’s been even more successful.  Potentially this movie could go that route too.  I like this movie a lot because of the casting, story and charm.  And it’s a lot slicker than Once.

CHUCK: I absolutely loved this movie.  The cast was just fantastic and you’re right – there’s a charm to it that is simply infectious.  The original songs in the film, for example – not familiar – but instantly have that vibe or sound of something familiar and good.

RYAN: An interesting notion that occurred to me whilst watching this movie is that it’s like the third act for Hollywood musicals.  They started out as musical reviews and Follies and then evolved where showtunes furthered the plot.  Then around the 70s and 80s, modern audiences became savvy and started rejecting that type of musical so Begin Again, is another of the new wave of musicals where characters in the film are performers and the songs are all organic to the story and the characters who sing them – like Walk the Line, Jersey Boys, even Burlesque is this kind of new, modern, movie musical.

CHUCK: And while the songs don’t necessarily propel the story forward, they at least all relate thematically to what’s going on in the plot.  It will be interesting to see if any get Oscar noms.

RYAN: They’re not showtunes like the songs in Frozen.  They are modern pop or folk songs.

CHUCK: Right.  They all have a very radio-friendly quality to them and it could totally be turned into a Broadway show again.

RYAN: I thought at one point that the casting director’s favorite TV show has to be The Voice because both Adam Levine and Ceelo Green are in this film.

CHUCK: (laughs) They were really good.  They play themselves, but successfully.

CHUCK: That’s a good parallel. They were good.  I love Ceelo.

RYAN: I just kept wishing Adam would take off his shirt, but alas, he didn’t.

CHUCK: He just acts and sings.

CHUCK: He’s on such a streak right now of picking and getting great roles.

RYAN: He can go from blockbuster to indie to aything.  The same can be said of Kiera Knightley, who by the way, I liked in this movie – for the first time in a non-period film.

CHUCK: She’s made so many period pieces.  I loved her in this too.  She was so strong and did her own singing.

RYAN: She and Mark had great chemistry.

RYAN: I’ve never liked her before this movie.  The costumes all tell the story of their characters, much like they did in Blue Jasmine.  And the sets and New York City are all so integral to the story.  The city is a literal character in this movie. And hello – BTW James Corden – whose career is about to blow up.  He’s starring in the upcoming Into the Woods movie musical this Christmas.

CHUCK: He’s so effective and very well known in the UK.

RYAN: The first half is very nonlinear.  You get the same story, jumping around from all different perspectives without talking down to the audience.

RYAN: The songs really do explore the musical moments in these musicians’ lives; but even without them, it’s still a fine story.  It’s another example of the power of music to elevate the emotional level of a story.

Thanks For Viewing The Begin Again Review