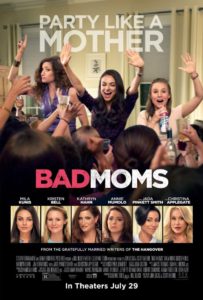 RYAN: It’s the latest R-rated female comedy and I’m loving that it’s a thing now. And I live for this cast. It might have been helped had it been directed by Pail Feig though. But this cast is a dream – Mila Kunis, Kathryn Hahn (total scene stealer), Kristen Bell, Christina Applegate as their nemesis and more… It’s good as an R-rated comedy and love the language, but the tone of the film is like an after school special.

BECKY: Even the lighting just made it all look like a Hallmark movie.

RYAN: OMG I love Hallmark movies, but you’re so right. This is better than that but it has some problems.

BECKY: My biggest was the casting of Mila Kunis – I didn’t really buy her in this role. She always seemed too much together to be taken seriously as a mother who can’t conquer it all.

RYAN: 100%. That’s exactly what I thought. I couldn’t take her seriously as the frazzled mom. And they even have a moment where they’re giving her a makeover, but I’m sorry, there was no change. She started out as one of the most beautiful women in the world and I just can’t imagine she was wearing an ill-fitting bra or whatever else they wanted to imply. They could have made it much more dramatic if she had no makeup, frumpy clothes, hair up, etc.. prior to that point.

BECKY: They basically just put her in a little black dress. And my other big problem was that the solutions to the problems were all very trite. This movie depicts a very privileged class. There’s money, girl power, wine, cool cars – it all helps – it’s for the upper middle class.

RYAN: We’re both not parents and this movie is clearly for people with kids. That’s not to say we didn’t laugh.

BECKY: We laughed, but we didn’t relate. We laughed more at the universally funny stuff.

RYAN: And these moms are all young moms of middle schoolers.

BECKY: It’s called Bad Moms. It’s a comedy but I know if I were a really bad mom, it would be different kind of person than is shown here.

RYAN: Right. In this movie, a bad mom, is just a mom who takes time for herself. They have a girls night and tell the kids to do something for themselves and they’re a bad mom? But back to Mila – for all that this isn’t a great role for her, she is still the most natural in it. Especially at the beginning of the film, and all of the kids in it, there’s a ton of overacting going on.

BECKY: There needs to be a montage limit in every movie. There were, like, six in this and they were just so much.

RYAN: There was one I actually leaned over and talked to you about it. It was too much. But I did like the theme of what I like to call playground politics – adults bullying other adults. That’s something anyone can relate to. But it also turns a corner and becomes a sorority movie at one point. And then there’s a moment where it’s very inspiring but it’s misplaced because it’s not as rousing as the actual climax of the film. And as for the ending – it’s like a fantasy – so unrealistic.

BECKY: Totally it is rather predictable.

RYAN: Those things are a let down. So while it’s funny, I’d rather encourage people to go see Ghostbusters now instead and wait to catch this at home someday.

Thanks For Viewing The Bad Moms Review