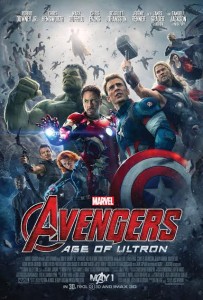 RYAN: One of the most anticipated movies since the last one came out in 2012, it’s gonna be a billion-dollar-grossing movie, Avengers: Age of Ultron is here and it starts off so great, having the whole crew together.  There’s a “hero-shot” new the open of the film, where they’re all together and you just feel excited tingles all over in that moment.  It’s so cool walking into a movie that you know is going to be great.

KIM: Yeah that’s the money shot and it sets the whole tone for the film where they’re working together as a team this time.  You’re reeled in from that moment.

RYAN: It’s a great ensemble – the original Avengers are all so great and the new additions as well.  But one thing I remember we discussed during our review of The Avengers, was how brilliant writer/director Joss Whedon is at throwing comedy into the action, without breaking the intensity of the moment.  But what I love about his timing and sensibility in this film is that there are so many new characters introduced and they each get their due.  No one is short changed.  The same is true for the original cast – it’s all so well balanced.  It’s expertly integrated.

KIM: He did my favorite TV series of all time – Buffy the Vampire Slayer – and Joss has an amazing talent to work with an ensemble and make everyone seem important.  He makes the story work in such a cohesive way, regardless of the size of the role.

RYAN: My fave Avenger is still Iron Man just because Robert Downey, Jr is so well cast as Tony Stark.  He’s so charming, I love it.  He’s almost typecast in this.  He’s a bit glib but charming and sweet.

RYAN: I’ve have the good fortune to interview him twice and he is just the coolest guy.

KIM: I could see that.  Captain America has to by my favorite Avenger because in the DC universe, Superman is my fave, and he has a lot of the same qualities.  Their good guy personality, to protect people is amazing, along with his superpowers.

RYAN: Then we have all these newcomers.  I was elated by the performance of James Spader as Ultron.  Great writing!  And it had to be written for him because he just stole scenes – in a motion capture performance!  Just sublime.  His face is animated so well, you see shade of him there.

KIM: I didn’t know who that voice was for most of the movie and then finally it hit me.  He has such a great, unique voice.

RYAN: Paul Bettany as Jarvis is brilliant and gets to do some more in this one as he becomes The Vision.  It’s sort of an original story for his character.

KIM: I really liked him too.  You don’t know where his head is at an that’s a cool part of the story.

RYAN: And then personally, for me, I loved having a witch!  Scarlet Witch played by Elizabeth Olsen is so cool.

KIM: I love her.  She’s the most talented Olsen.

RYAN: No one will disagree with you there.

KIM: Since you introduced me to her in Martha, Marcy, May, Marlene, I was impressed by her.

RYAN: And in Silent House, and so many others.

KIM: I loved the addition of her to this cast.

RYAN: Aaron Taylor-Johnson as Quicksliver is awesome too.  I did like the first Avengers more.  I saw it a second time in the theater.  I don’t know that I’ll run to see this one again but I did really get into it.  It’s a bit slower.  There’s more story and it feels more like a transitional film for the next one.

KIM: It is a bit slower.  It doesn’t lack for action by any means, but it was necessary to get to know these characters better.  We don’t wanna give anything away but there are some sweet moments.

RYAN: The design, costumes and effects are great  The 3D conversion is unnecessary.  It’s not well done and you don’t even notice it. I hate wearing those glasses for no reason and they make the picture a little darker.  It needs to be consistently dynamic 3D and it wasn’t here.

KIM:  I think if you like movies in 3D, it’s worth a could extra bucks and if not, you can go without it.

RYAN: It’s the start of what may be one of the best years for box office in history.  Remember to stay through the credits for the extra scene from Marvel with a clue for what’s to come in future movies.  Just such a great time in the theater.

Thanks For Viewing The Avengers: Age of Ultron Review