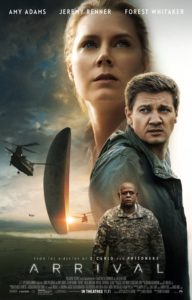 RYAN: This film is astonishing. It’s like a sequel to one of my all time favorite movies – Contact. I am awestruck by it. I mean, I actually sat in awe of this movie – just enjoying it but then also impressed so much by how savvy the script is. It fully manipulates you in the audience. It takes advantage of the fact we are going to make certain assumptions about story and characters and the way the film plays out is so clever. It doesn’t look down on you. It respects you. I just can’t even say anything because I don’t do spoilers but you end up feeling very smart. And it’s so cool.

CAROLINE: That is quite the intrigue, you just set up there. I’ve been dying to see this movie. Amy Adams and Jeremy Renner – plus you’ve got Forest Whitaker. How are they?

RYAN: It is kinda funny seeing Lois Lane and Hawkeye together – I mean it’s DC meets Marvel, right? But I really didn’t think of that. She’s a linguist, he’s a scientist. And Forest is a colonel. They’re all very good – but it’s the material they’re woking with that comes to life in such a great way.

CAROLINE: That’s cool. It’s about a sort of contact, right?

RYAN: Yes and the challenge with any movie covering this subject is how far they’ll go. Will they show aliens? And if they do – will we buy it? Or do they just cop out and leave it all to your imagination? I won’t give it away but I will say that at one point I felt very disappointed and then at another, I was, like, Holy Moly! It’s an awesome movie.

CAROLINE: You’re getting me excited.

RYAN: It should get a best pic nom and absolutely one for Amy. She’s so incredible in this. It’s a very different role for her and super nuanced and layered. I loved watching her work in this. I love how this film makes you wonder – what if there were some communication between our world and outer space?

CAROLINE: It is a big question.

RYAN: But this does have a familiarity to it as well. And it’s part of what makes it suspenseful and frustrating. Why is it that in every movie with aliens, the humans seem to screw it up? Like, even in ET, or even with a mermaid in Splash, there is still that government intervention that makes things regrettable and pulls at your heart. You know?

CAROLINE: Oh completely. So is this derivative that way?

RYAN: I wouldn’t go that far but it is reminiscent. I love where this film goes though. It’s so creative and surreal yet believable. The effects are wonderful. It’s electrifying at times, and you actual get a jolt of adrenaline, without any jumps.

CAROLINE: Good. I wouldn’t want to be scared.

RYAN: Thematically I was super into it as well. It’s about communication, unity, kindness, patience… all good and important things.

CAROLINE: I really want to see this ASAP.

RYAN: This week with the election – when we’re so focused on America, it’s really amazing to see this film and look at the globe, the earth, the universe – and again remember how small we are and it’s not all just about us This movie is crazy good.

Thanks For Viewing The Arrival Review