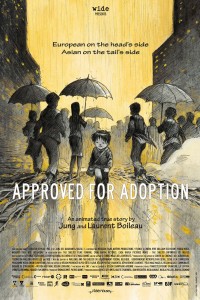 RYAN: This is an incredibly powerful, unique film.  It’s part live action, part animated and flips between narrative story and documentary.  I’ve never seen a movie like this before and like any good film, it starts with a good story.

CAROLINE: What’s it about?

RYAN: It’s the story of a boy who was born in Korea but adopted and raised in Belgium.  It’s his coming of age with a hardcore identity crisis; feeling like he’s not a part of any world.  But it’s told in a way that makes you deeply feel what he experiences.  That’s the brilliance of this unusual technique and I was actually crying at the end.

CAROLINE: Wow.  I don’t think I’ve ever heard you use that word before.  You barely even tear up at movies.

RYAN: Sometimes I get misty but this one really got to me.  And it’s not sad as much as it’s touching.  It really affected me.

CAROLINE: I love how movies can do that.

RYAN: True.  Entertainment, art with a message.  It’s really cool and the mingling between the animated story that acts like a reenactment of his memories, cut between documentary footage is not only technically innovative, but very effective as a story device.

CAROLINE: It does sound cool.

RYAN: As an adult, he eventually returns to Korea, looking for his birth mother but he realizes he’s been living his life in a fantasy world; basically denying who he is.  Some of the scenes illustrating his childhood were traumatic for him, especially his relationship with his adoptive mother.

RYAN: It raises interesting issues we don’t normally think about.  Like the thousands of kids adopted from other nations and the issues they face – feeling like an outsider within your own family and resentment leading to self destruction, etc… it hits hard.

RYAN: But it’s all told with a deft and delicate touch.  The animation is beautiful.  The drawing is very soft and pretty and the main character, Jung Henin – the director (it’s his story), is himself a cartoonist so it’s all the more fitting that it’s part animated.

CAROLINE: I like how it’s different but works.  That’s a cool accomplishment.

RYAN: I’m blown away by this film.  It’s a huge dose of reality disguised in an entertaining story.  It’s absolutely worth seeing for enjoyment and to start some conversations.

Thanks For Viewing The Approved for Adoption Review