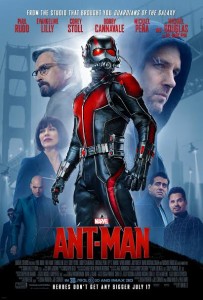 RYAN: It’s latest superhero film from Marvel Studios and no one was really anticipating this because no one knows who this character is.  But they will now as it’s a real crowdpleaser.  After the screening, everyone was thrilled by it.  I, however, never totally got all into it.

CHUCK: I am 100% opposite from that. This is now one of my favorite Marvel movies. I loved it.  I found it unique and charming and funny.  I enjoyed the action sequences.

RYAN: Some of the effects were great.  And they used them to create both exciting and humorous reactions.  I must say, though, that much of this film felt derivative.  This is Ant-Man’s origin story and it felt a little Spider-Man’ish to me… though I suppose it could be argued there are many similarities among any superhero origin story.

CHUCK: Yeah there has to be a formula to the “regular guy gets super power” concept. You can do that with pretty much any superhero- one DC one Marvel. It’s like comparing Greek gods and Roman gods, they have similar archetypal characters.

RYAN: His suit is kinda like Iron Man’s suit, with different powers.  The shrining idea reminded me of Mike TV from Willy Wonka and the Chocolate Factory, not to mention the whole reluctance to embrace the power scenario.

CHUCK: I see that but I still found it to feel fresh.

RYAN: I’m just not as impressed with him, as a hero, as I typically am with other guys like Superman, Batman, etc…

CHUCK: Now that I know who he is, I like Ant-Man.

RYAN: I like Paul Rudd.  But it was like he wasn’t allowed to be the Paul Rudd I love.  You know he wasn’t as charming or funny or quirky. He was just kind of, like, stuck in this role.

CHUCK: Did we see the same movie? Because I thought he was absolutely charming. So, You don’t want him to be the same character in every movie.

RYAN: Michael Douglas is fantastic in this.  There’s an amazing scene at the beginning of the film, which takes place in 1989; we see a younger version of Michael Douglas and he looked so much younger – whether it was makeup and a wig or CGI, it was was really fantastic. I mean he really looked like the young Michael Douglas.

CHUCK: That was very cool. And I’d like to add they really did a great job of tying into the different Marvel universes, with Agent Carter and Avegers references and the like.

RYAN: Just why did Evangeline Lilly’s character have a 20s flapper hairstyle?  It was totally out of place and even distracting. I’m not a big fan of hers to begin with and that hair didn’t help.  Remember in 2010 when she announced that she was retiring from acting because she wasn’t passionate about it?  And now she goes onto to do mainstream blockbusters like this and The Hobbit.

CHUCK: I thought she looked great.

RYAN: She is a very pretty woman.  I just wasn’t into the period wig.

CHUCK: I think she’s cute.  The role didn’t ask that much of her, to be honest.  But what she did was fine and I liked her with Michael Douglas.

RYAN: There was action and excitement but a bit more tempered than most other superhero movies.

CHUCK: It didn’t have an hour and a half ending like the Avengers does. It’s not a non-stop finale fireworks display for a movie.

RYAN: It’s a little more modest. Everyone in the movie club at the screening was beaming and delighted walking out of this. So it’s a certified crowdpleaser.  I can’t help but compare it to other Marvels in the genre and there I think it falls short.  I was debating between the Rent It and See It rating for this one.  I certainly enjoyed the film so I’ll be generous with this one.

Thanks For Viewing The Ant-Man Review