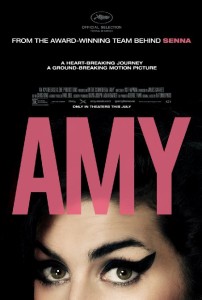 RYAN: The new Amy Winehouse documentary is really great because you to spend some time with her again.  She was so unbelievably talented, born with a gift,  She was so unique and really one of the greats, gone too soon. But also from the minute that the doc starts, it’s heartbreaking because you know how it ends.  Drugs are bad. But at the same time you have to sympathize with people who tried it once, got hooked, and addiction is real. That’s the heartbreaker of this.

CHUCK: It’s like Titanic – you knew what was going to happen all along. This movie really fills in the gaps that all of us had of what we thought we knew about her.

RYAN: I blame her parents, primarily, because it goes back to when she was very young and her mom saying that she couldn’t discipline her and her dad not encouraging her to go to rehab the first time she should have. Although, had he not, we never would have had that brilliant number one grammy-winning record of the year so it’s kind of like…

CHUCK: Well, as with anything, we wouldn’t have known that we were missing. About half an hour into the movie I kept on saying in my head “What is with the dad, what is going on here?”. And it shows what happens to children when their parents split.  She had such a reverence for her father who was absent and wasn’t there.

RYAN: I read that she did have a good relationship with her parents, obviously she loved them; they made mistakes in raising her that ultimately affected the choices she made… and the men she chose in her life- and also the lack of self-control and her own self-discipline and responsibility for her career. She was totally ill-equipped for stardom.

CHUCK: That messed her up as much as anything else. Something that this movie does so brilliantly is it shows lot of actual footage, personal recordings, etc.

RYAN: It’s as if she narrates this.

CHUCK: In the beginning, when she was starting off with this great record deal, she was touring around England. She did not want fame and that’s not what meant success to her.

RYAN: And it just goes to show… the people who are the most talented, who are in in for the love of the craft, and the art, she wasn’t in it for the fame, how most would define success. She really just wanted to connect with music and when it got bigger than she could handle, should declined.  She admits she knew from the beginning that she couldn’t handle it. It was out of control. As it is for anyone; some people adapt and she couldn’t.

CHUCK: And we learned she was dealing with depression, too, and I can only imagine when you have the pressure of a studio who is trying to promote their product, because that’s all you are to them is a product, they push you and push you and push you to a point. Although I think too late, the studio did come in at one point and told her “We need to get you fixed up.”

RYAN: We think of her today as this frail weakling who was sick and a drug-addic; but this movie changes that impression.  You see her before addiction – in her late teenage years, before she became big.  It’s cool to see her very healthy and before the beehive hairdo and the makeup.

RYAN: The cute, young. Jewish girl from London. Seeing that was really sweet and gives a new dimension to what one thinks of her.

CHUCK: She arrived at the American stage already a joke. By the time that we already met her, so to speak in this country, she was already in the midst of huge drug and alcohol abuse. And I agree, getting to see her normal and funny and with her friends and she had a hysterical sense of humor.

RYAN: I also had no idea she was bulimic.  She was always really skinny but no clue she had an eating disorder.

CHUCK: I didn’t know that either. And adding bulimia on top of alcohol and drug addiction, horrible. People in the film were saying she could drink anyone under the table and it wreaks havoc on anyone’s system to drink that much.

RYAN: It was co-dependency. The director did a very good job of making the issues black and white, without pointing a finger, just seemingly telling the story. It was obvious what the mistakes were that led to her demise, where she’s responsible, where it’s sort of her destiny.

CHUCK: And where she lost control and it was up to the other people around her to get her her out of it. She was drowning and no one jumped into the pool to save her.

RYAN: There’s a great flow to the documentary, too.

RYAN: The very beautiful way that her lyrics displayed on the screen during the songs.  It’s great because…

CHUCK: She wrote them. I didn’t know that either.

RYAN: It’s nice to hear her songs, but reading her lyrics in the context of this film was great because it really reiterates that she wrote from her experiences and they were all very personal songs.

CHUCK: Her albums were like her diary and we got a chance to be front and center in what her feelings were.

RYAN: A lot of artists do that but I feel like these lyrics were super obvious.

RYAN: And the first thing that I’m going to do is go listen to her music. She’s gone too soon.

CHUCK: Such a powerhouse, such a unique voice and she really played into that archetypal tragic jazz singer that has given us the voices of Billie Holiday and Etta James and all of these people.

RYAN: I would have loved to have seen what was yet to come had she survived. And we’ll never have that but what we do have is this, so go see it.

Thanks For Viewing The Amy Review