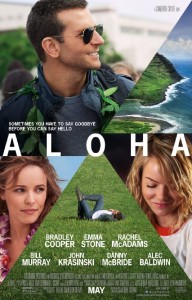 RYAN: This romantic dramedy is the latest from writer/director Cameron Crowe, who is known for Jerry Maguire, Almost Famous, Vanilla Sky, We Bought a Zoo…

RYAN: Mediocre.  It’s tight and the characters are very well defined but it never quite snaps together in a way that makes you feel any spark the way you have in his previous hit films.

CAROLINE: Such a shame.  And this cast is amazing.  I mean, Rachel McAdams… we love her!

RYAN: Yes and I love her in this but she doesn’t have a very provocative role. I was a bit bored by much of this movie.  It’s enjoyable and watchable and the star power and appeal is all very strong- but it’s the story and the screenplay that’s the problem.  for the first half of the movie it feels like a bunch of subplots.  Nothing rises to the surface as the main focus of the film until about halfway through.  And then it’s melodramatic and overacted by Bill Murray and Alec Baldwin.

RYAN: It’s like Alec does a role that was written for Jack Nicholson, who obviously isn’t working, so…

CAROLINE: What about Bradley?

RYAN: I really didn’t buy her at the start.  She looks like she’s wearing a Tom Cruise in Top Gun Halloween costume.  And then she gets really good when her character relaxes.  But I also find fault with the chemistry between her and Brad.  There’s 13 years between them and it was a bit forced.  This movie is a drama with a rom com twist and your heart never leaps the way it should.

CAROLINE: That is such a bummer.  You just never know until you see it.  Were there any highlights?

RYAN: Yes the comedic bits were cute and brought much needed levity.  There’s a random dance between Emma and Bill Murray that I loved.

RYAN: There’s also some funny nonverbal communication going on with John Krasinski’s character that was cleverly used in the plot.  But there are problems with this film.  It’s not a home run.  Though, I would recommend watching it… at home.

Thanks For Viewing The Aloha Review