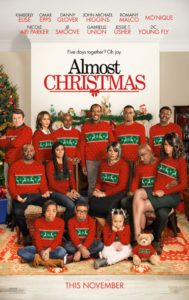 RYAN: We need a little Christmas right about now, don’t we?

CAROLINE: Well, ’tis the season! How is this movie?

RYAN: It has one major strength, some little ones and then a big weakness. It’s not bad though.

RYAN: Maybe I’m a bit jaded on the holidays right now because it feels so early for this but the cast is great. Danny Glover, Gabrielle Union – who is so adorbs and looks like she could still play a high school role… and then Oscar winner Mo’Nique! Whoa!

RYAN: I know I call someone a scene stealer when it’s deserving but in this film, She not only steals her scenes, she tears them down, chews them up, spits them out and rebuilds them. She’s utterly incredible in this. The film should have just centered around her.

CAROLINE: Is it slow?

RYAN: The pace is good, but it’s episodic. It takes place in chapters, each counting down a day closer to Xmas. And while I appreciate how this family deals with themes universal to many families, it’s a bit heavy handed on the sad factor – a bit desperate and manipulative to try to make you feel sad for them – and in turn uses that to tweak relationships in the family. And it’s soooo predictable. That bored me a bit.

CAROLINE: Yeah that’s never fun – when you just know what will happen.

RYAN: But I some of the drama, more than the comedy, is good. But it’s really not anything you have to run to see in the theater – especially as we’re getting some of the year’s best films hitting right now as well. This is one for the couch someday.

Thanks For Viewing The Almost Christmas Review