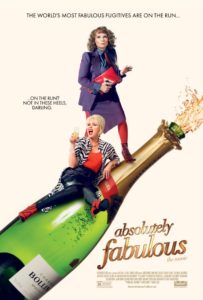 RYAN: This movie is so long in the making – it has been rumored to be in the works for years and at last it’s here! Based on one of the most popular BBC sitcoms, it aired over here and garnered a cult following in the US. I’ve always enjoyed it – It’s Jennifer Saunders and Joanna Lumley who play aging, neurotic, narcissistic, alcoholic, drug addicted, superficial women who are hilarious. Everything is funny from the way they deliver their lines, to facial expressions, to the way they walk and move. It’s similar to Sex and the City, in the sense it’s a movie based on a TV series and everything is bigger – music, guest stars, locations, fashion… it’s larger than life. But unlike, SATC, the story didn’t feel as cinematic and it didn’t quite live up to my expectations.

BRAD: I’ve been a fan of Ab Fab for years. Ever since the 90s when it had a laugh track on the show. It was fashion, drinking, drugs, neglect of children, abuse of the elderly, selfish, narcissistic fun. And it was light, not a heavy moment in it. This movie just seemed… tired. It seemed like they were having more fun making it than it was watching it. I love everyone in it and that they’re back together again, but it didn’t do it for me either.

MICHAEL: They go to these beautiful places, you just have to wonder if Jennifer wrote that so they could just go on vacation together, you know? They should have taken all the things we love about the showing put it on the big screen – some of that was there but not enough of it. It all felt too different. It’s a continuations but without all the signature things. Starting with the sets, the kitchen was different. Not having the original kitchen and house, it threw me off a lot.

RYAN: It’s also unlike the series, not only in length – 90 minutes, but also in depth. Brad, you mentioned how light the show was; but this film had depth with themes and morality, character growth, which the show always lacked. That disappointed me and instead of giving it heart, it weighs it down, the levity and comedy. You don’t want to see frivolous characters you love grow up.

BRAD: Right. And all the things that we expected of the characters, in terms of how they relate to each other, were there but in shorter supply than we’d have liked. That being said, it was so great seeing them again, including the daughter, the assistant… I fear this is 12 years too late. If it had been done then, it might have had more sizzle and fun to it. I did laugh though.

RYAN: The show ran on and off from 1992 – 2012 and the movie might have been better placed four years ago. I also laughed – especially just as it started because it was just so refreshing to see them on the big screen.

MICHAEL: I laughed out a little. But I still wanted more of it. A nice thing about it was that they introduced more people like that actor from Glee…

RYAN: Chris Colfer. Yes he was a surprise. And there were great cameos – Rebel Wilson, Kate Moss, Dame Edna, Perez Hilton. That’s about it for who American audiences will recognize. There are a ton of British folks and fashionistas.

BRAD: If you’re in the fashion world, and Ab Fab has always lived on the edges of it, the establishment is against them, but it is a who’s who.

MICHAEL: I enjoyed the fashion even more than The Devil Wears Prada or Bruno, or movies that lampoon the industry because it was funny. Jean Paul Gautier was hysterical.

RYAN: Also the interviews on the red carpet – there is a behind the scene feel to celebrity and fashion that does seem more real than portrayed in other films.

MICHAEL: It was edited rather poorly, very choppy. Scenes were very removed for a while then you’d come back to them. Every scene transition was set up the same way.

RYAN: It does stray for a while from the main plot and you forget it until it returns to it. This is a modern version…

BRAD: But it feels very dated. They’re fish out of water and that’s really not who they are. For two long time people in the fashion and PR industry, they didn’t know anything about the current technology and that was another miss.

MICHAEL: If this was an exercise to test their relevance in today’s world, they failed. But for fans it is a love letter.

RYAN: It is for the fans. And if you love it, by all means go and enjoy it on the big screen. But for those unfamiliar with the show, it’s one to catch at home someday, just like the TV series. In fact, you might more enjoy seeking out the original show.

Thanks For Viewing The Absolutely Fabulous: The Movie Review