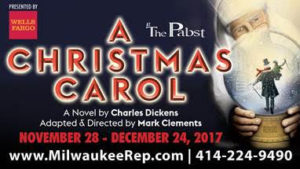 Who doesn’t love A Christmas Carol? It is simultaneously exquisite entertainment and precious life lesson. Charles Dickens’ classic works across all mediums. From current cinematic biopic in theaters (The Man Who Invented Christmas), to the made-for-TV hit (A Christmas Carol: The Musical), it is a story that perfectly lends itself to adaptation. As for the live stage variety, it cannot be improved upon from this season’s Milwaukee Rep production now playing at the Pabst Theater through December 24. It’s a bonafide Milwaukee blockbuster! The set design seems alive, creating a haunting labyrinth of mid 1800s London where “real” snow falls down on the audience. The play is balanced with poignantly placed Christmas music and star-turn performances from the ghosts. You’ll want more of Todd Denning as the Ghost of Christmas Present and leave the theater obsessed with Deborah Staples. Her Ghost of Christmas Past is magnificent, elegant, and soaring. In his second year as Scrooge, Jonathan Wainwright is still clearly finding his footing with the role. The overall production, however, is literally as good as anything on a Broadway stage. (And that’s not said lightly.) Kudos go out to writer/director Mark Clements and the creative team who have cultivated the show ongoing 47 years. But this year’s version is quintessential. Whether you’ve seen it before or want to check it out for the first time, this version is a winner!

Thanks For Viewing The A Christmas Carol Stage Review