CAROLINE: How was it?

RYAN: It’s so worth it.  We’re not baseball fans but you simply don’t have to be to enjoy this movie.  It’s such a well crafted film and I was totally edge of my seat during the baseball scenes.  If real baseball was like this movie, I’d be the biggest baseball fan in the world!

RYAN: Terrific.  It’s basically a TV star, Chadwick Boseman, as Robinson and he’s great.  Then there’s Harrison Ford as the owner of the team, doing his best Clint Eastwood impression.

RYAN: He’s gruff-talking in this movie. He sounds like a cross between Clint Eastwood and Christian Bale as Batman.

CAROLINE: [laughs’ I know exactly what you mean!  Scary.

RYAN: He’s great though and plays it with bravura.  And he has a moment that’s so good, if this movie were coming out later in the year, it would have been an Oscar contender.  It’s random timing to come out now.

CAROLINE: Well it is around the start of the baseball season.

RYAN: Too true.  This is a great American period film – the music, costumes, hair, cars… all cool but the racism of the time was scary! It’s truly disturbing and it’s really not that long ago.

RYAN: Yes! He hasn’t done much since TV’s Grey’s Anatomy but he is here and he’s great. 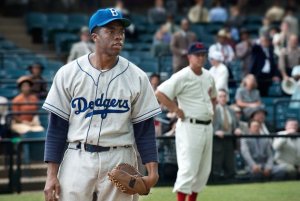 CAROLINE: It looks like a decent movie though I haven’t been that inspired to see it based on the commercials.

RYAN: It’s really a technically good movie and also a wonderful entertainment.  It’s very complete and just rousing, again.  I was very moved by this film in several ways.  Robinson was a helluva talent but an underdog, a pioneer and a hero to many.

CAROLINE: Wow, you should be writing the tagline for the movie!

RYAN: What I’m trying to say is, even if you’re thinking this movie isn’t for you, it is.  It’s for everyone and it’s great.

Thanks For Viewing The 42 Review