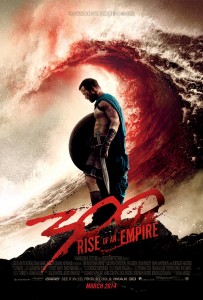 RYAN: This is the – what’s the word for it – part prequel, part sequel…

MICHAEL: It takes place before, during and after the first film, 300.

RYAN: Gerard Butler starred in the first one and has just a brief appearance in this one.  He is seen but not heard.  It’s more of the same, visually; an R-rated, sexy, bloody, non-horror slasher movie.

MICHAEL: It’s based on a graphic novel that hasn’t come out yet.  300  is out but the sequel, Xerxes, is not out yet.  Frank Miller can’t draw his bad ideas fast enough for Hollywood to make movies.

RYAN: (laughs) Wow ok.  I liked the first one; but what I liked about the first one lacked in this one, which is a sense of romance and the charisma of Gerard Butler.  But Eva Green is a bit of a saving grace.  She’s one of my favorite actresses.  She’s fantastic.

MICHAEL: She carried the whole movie.

MICHAEL: They changed the color palate and had some cool fight scene but totally lacked heart.

RYAN: And by expanding the color palette, you mean there were a couple blue capes instead of solely red.

MICHAEL: Exactly.  The entire first movie was all warm.  This one had still blood in the air.

RYAN: It’s a total boy movie, trying to be tempered with narration by a woman and the strong character played by Eva, but it’s still just a dude movie.

MICHAEL: It really is.  And to have all of the parallel characters to the original but also include them was redundant.  I was afraid it would remind me of The Spirit, also by Frank Miller but this just had no pulse.

RYAN: I did like the God-King, Xerxes, in both the original and in this one because he’s just the side, shy of being a drag queen.

MICHAEL: But he was much more golden and terrifying in the first one, a monster.  In this one, he was more human.

RYAN: He was much less imposing in this one.  I feel kinda bad saying this but I actually like the bloodshed in this movie.  The way it’s all a special effect and in slow motion is directed like a video game, slowed, spinning around and cool.

MICHAEL: The effects are fantastic and it’s visually nice.

RYAN: It’s really a movie that would appeal to young boys but because it’s rated R and there’s nudity and sex and loads of blood and violence, they’re edged out of this.  Then again, without the blood, there’d be no reason to see it at all.  Well, maybe except for the man-candy.  Do you drool or just go to the gym and start doing crunches?

MICHAEL: The first one had much more of that.  There’s a lot of makeup producing the look of that but this one isn’t as reminiscent of typical Frank Miller novels.

RYAN: The thing that annoyed me the most was the 3D.  It’s very weak and they added these dust particles in that come in and out of focus, just floating around the whole time that is so distracting and for no reason – fake and awful.

MICHAEL: It was just gratuitous 3D.  It’s like ember without fire.  The effects were cool but really didn’t make sense because a lot of the regrouping was on land but the fighting was at sea.  And Gerard Butler was much more rousing in the first one that this one.

RYAN: This one is visually stimulating but seriously lacks oomph, heart and story.  See the original again or wait to rent this one.

Thanks For Viewing The 300: Rise of an Empire Review