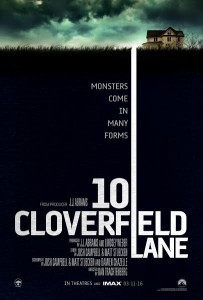 RYAN: Whoa this movie! This movie has one of the most brilliant trailers – it’s such a great tease to see the movie, without giving too much away.

CHUCK: And JJ Abrams pulled off one of the greatest coups in recent Hollywood history – no one even knew this movie was being made, let alone being in the Cloverfield family.  Some reports had it under a different name and was just given a Cloverfield makeover in rewrites and reshoots.

RYAN: It’s now a franchise. We just saw it and it’s outstanding. It’s the most brilliant blend of Misery meets Room meets The Lovely Bones.

RYAN: It’s not a combination you wanna see, outside of your nightmares. It’s terrifying. I’m calling it – it’s a horror movie.

CHUCK: If you have claustrophobia or panic issues, you may want to take a Xanax prior to seeing this film.

CHUCK: Some of the most authentic jumps and scares.

RYAN: We both hit each other, screamed out loud… as was the entire audience. And you wanna see this on the biggest screen possible, with the most impressive, loud surround sound! It’s immersive. When everyone’s screaming, then you still hear the movie and it’s not disturbing anyone.

CHUCK: I wonder if it was recorded in Dolby Atmos, because the sounds were coming from everywhere – and that process has the speakers on the ceiling.  The sound engineering is fantastic in this.

RYAN: The first thing I said when the movie ended – I feel like I need to take a Lamaze Class to learn how to breathe again. I felt like I gave birth several times during this movie!

RYAN: I kept holding my breath.

CHUCK: I felt like we just got off a roller coaster. The train just pulled into the station and you think, “I survived. It’s over.” It’s fun but scary.

CHUCK: Produced by JJ Abrams and the directorial debut of Dan Trachtenberg.

RYAN: Bravo. You can’t tell whether it’s a sequel.

RYAN: It’s an interquel – between prequel and sequel.

CHUCK: It does seem to start before the original, in a different part of the country and goes past.

CHUCK: She carries the movie – you experience the film from her perspective and there’s such a tidal wave of emotion.

RYAN: You don’t know who to trust which keeps you so on edge, keeps the intensity so high. You feel fear.

RYAN: I didn’t even recognize him at first with the beard. He’s good though.

CHUCK: And John Goodman is terrific.

RYAN: He’s a little problematic in this role for me. I think the movie would have improved slightly from a more frightening casting – maybe someone like Robert DeNiro, I would have taken more seriously. John was good, not great.

CHUCK: I thought he was great. He has played a few other unlikable characters before.

CHUCK: He is still John Goodman, you’re right. A lesser known might have been more effective.

RYAN: This could remain on my top 10 list of the year. I was more scared in this than most horror movies I see. There are some Saw moments.

CHUCK: It’s totally original, for all that it harkens to other things. The score is excellent and the soundtrack is contradictory and perfect. Visually, there are David Fincher, Hitchcock…

RYAN: Kubrick… It moves. The less you know going in, the better – do not seek spoilers. It’s shot and edited so well and the effects are great – see it big and loud!

Thanks For Viewing The 10 Cloverfield Lane Review