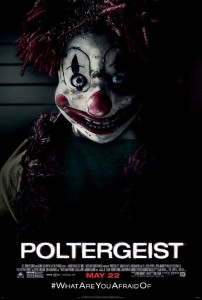 RYAN: It’s the remake of the classic 1982 horror movie Poltergeist which was produced by and – rumor has it – directed by Steven Spielberg.  I saw it as a child and never found it scary.  I liked it.  This one is a remake but also a modern retelling because it has iPads and iPhones and the story uses electronics.  As a side note, I’m thrilled Chuck is reviewing this with me because I can never get you into a scary movie and this one you made an exception for.  Why?

CHUCK: I love the original.  But this one didn’t scare me.  I jumped a couple times but it’s, like, a family friendly haunted house film.  It’s PG-13.

RYAN: The original was PG.

CHUCK: But that was before PG-13 existed.  I was around 10 when I saw the original and it scared the living bejesus out of me!  To this day, I think it’s a brilliant, well-crafted, great movie.  It was hard in this because…

RYAN: …You can’t help but compare it to the first one and it doesn’t measure up.

CHUCK: Yeah I kept identifying where they were pulling things from the original but not as good.

RYAN: There are memorable things from the first one, reinterpreted for this one, but maybe because how it looks more slick and modern, it’s not as creepy.  It’s in 3D, though, which was very good.

RYAN: I like clowns.  Never scared me and this movie wasn’t scary at all.  The clowns were just ridiculous.

RYAN: The scariest this movie gets is about as scary as the Michael Jackson Thriller video.

CHUCK: It was a bit too polished.  It’s definitely updated and changed.  This one is seen through the eyes of the middle child, who has a bigger part.

RYAN: It takes away from some of the suspension of disbelief because the movie hinges on whether you believe him and I didn’t.

CHUCK: Totally.  There are implausible things, obviously and the main story follows the youngest daughter disappearing but the stakes don’t feel as high in this one.

RYAN: You cared more in the first one.

CHUCK: Maybe it’s because I knew how it would end?

RYAN: Why did they have to change the characters names?  I really missed the line “Don’t go into the light, Carol Anne!”

CHUCK: Or changing the situation of the parents, their subplot.

RYAN: I do like them though – Rosemarie DeWitt and Sam Rockwell; but he was miscast.  I like him in drama and comedy but I never bought him in this horror.

CHUCK: I liked him.  This one is just lacking its ferocity.

RYAN: I missed the pool.  And the tree in this one was lame.

CHUCK: The climax is changed.  The first one has three.

RYAN: This one falls flat in comparison.

CHUCK: In the original they’re fighting against Satan, the beast.  And this one isn’t as frightening.

RYAN:  Sadly, I find most horror movies like this.  I liked this more than those horrible, cheap found footage movies, but barely.

CHUCK: I’d take my niece to this to introduce her to horror.

RYAN: I wouldn’t.  Just show her the original.  Watch the original one again and skip this one.

Thanks For Viewing The Poltergeist Review

The Trial of the Chicago 7, Honest Thief, 2 Hearts Review

Save Yourselves!, The Boys in the Band, Eternal Beauty Review