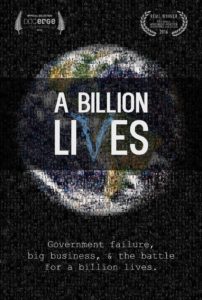 RYAN: This is a brilliant documentary that just held its world premiere in New Zealand and will premiere in other countries soon. It covers the outrageous amount of misinformation out there about vaping, as it relates to the tobacco industry losing money. E-cigarettes and vaping not only help people quit smoking but they can potentially save a billion lives in making the switch, thus the title. This film powerfully delivers an urgent message. It will frustrate and enlighten you to the second coming of the Tobacco industry’s lies. For decades they lied about smoking’s link to cancer and now they’re trying to snuff out its best alternative. I was so angry when this movie ended, I felt like I could chew glass.

BECKY: (laughs) I understand the feeling. This doc is incredible at not only starting the conversation about the truth of vaping, but encourages it. The information here doesn’t come across as biased; but rather as matter of fact, diplomatic and caring.

RYAN: And it’s not only tobacco. Also highlighted is the threat to the cancer “industry,” anti-smoking charities, and government tax revenues. This movie is enraging. It could shake people into action – if not only to switch from smoking to vaping, but to at least allow people to have the choice to switch. There is much corruption by authorities across the board – the businesses, the politicians, the FDA – it’s sickening.

BECKY: I’m a smoker and if nothing else, I’ve learned I cannot trust the tobacco industry or any big business involved in my healthcare.

RYAN: Since the tobacco industry used to lie about the dangers of smoking – denying their knowledge of that fact for decades before being held accountable for it – they have proven themselves untrustworthy and corrupt. How can anyone believe anything they say or those they influence?

BECKY: Watching this movie makes it obvious that the tobacco industry and out government just think we’re all a bunch of shmucks who will believe anything. It makes you feel like they have zero respect for our ability to make sound decisions about our health, based on facts.

RYAN: The misinformation they’re putting out about whether vaping is good or bad is insane. And why ban e-cigarettes? It makes no sense beyond the threat to tobacco sales.

BECKY: We’re allowed to question vaping as a viable alternative and this doc really supports that. We should have questioned smoking in the first place. We know smoking is bad, so why are they trying to take away the option of vaping?

RYAN: Vaping is potentially 95% better. Director Aaron Biebert narrates and appears in the film, which provides a great, first-hand entrance to the discussion. One of the coolest aspects of this film is that while there’s a lot of info coming at you, you don’t feel lectured to. You feel included in the conversation. It elicits emotional responses and provokes a lot of consideration about the topic; which is a great strength of any good, topical documentary. It’s an impressive debut feature from a first-time director.

BECKY: Aaron is also refreshingly Milwaukeean; sincere and doe-eyed. He seems naturally unrehearsed in his delivery, which I appreciated as a thinking and analytical person who is not receptive to preaching.  I don’t want to be told what to think, and although he had a clear opinion, I did not feel any urgency from him to blindly agree with him.  Instead, I saw him as a human being with an earnest interest in learning more.

RYAN: He’s real. Midwesterners are known to be welcoming and kind and he effuses those qualities.

RYAN: And perfectly lit! This doc has a great mix information that’s been put out there by advertisers, public speakers, talking heads, politicians – but also features interviews with experts in the vaping industry and personal accounts of people who have tried to quit smoking; and then there’s the former Winston cigarette model who carries the first third of the film. His life flipped from poster boy to anti-smoking advocate.

BECKY: He has clearly done his research. He lived it. He is such a legitimate source, hearing his story and how he’s trying to help others now is eye-opening.

RYAN: It’s crazy and almost depressing that because of all the misinformation we’ve been fed, as Americans, that this director had to travel around the world to get some real answers and uncover the facts.

BECKY: The representatives of our organizations – government, healthcare, whatever – the smoking industry truly embodies a sociopathic organization; completely without conscience.

RYAN: I also learned so much about nicotine. We think nicotine is so bad; and while it’s addictive, it’s not the killer that tar and tobacco and burning are.

BECKY: We have a right to ask questions about what we’re putting into our bodies and how healthy they are or not. And the director pops up throughout the film asking the questions I was thinking in my head. It’s just maddening to me that this film elucidates the fact that the exact people who are against our health are making decisions about it. And in an election year, where issues are more timely than ever, these are the kinds of topics we should be publicly dissecting. Learning about the government’s involvement here is almost unbelievable – at the end of the day, they make more from smoking than the tobacco business does.

RYAN: A Billion Lives is an education. It’s a wake up call. This film should shock smokers – and those of us who care about someone who smokes – into action.  Like a companion piece to Merchants of Doubt, it could have a similar impact as Food, Inc. A Billion Lives is like the Fahrenheit 9/11 of tobacco. Find the facts. Learn the truth. Vaping shouldn’t be banned. Let tobacco industries and the cancer “industry” makes less. This doc should be required viewing.

Thanks For Viewing The A Billion Lives Review